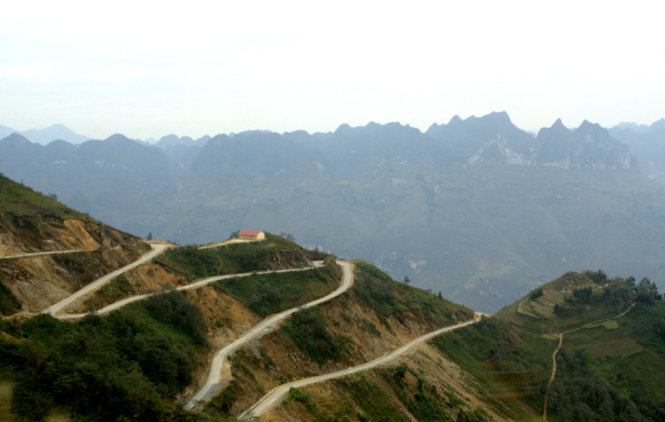 Warmth at a UNESCO-recognized karst plateau in northern Vietnam (photos)

The awe-inspiring scenery of a northernmost province and the simple, rustic life led by the ethnic minority groups who reside in the area are really bewitching to local and foreign tourists alike.

Xin Cai Commune, located in Meo Vac District in northernmost Ha Giang Province, in this season is void of “carpets” of “tam giac mach” (buckwheat) pinkish flowers, which typically bloom around late October to early November every year, just after when the yellow of terraced fields fade.

The commune is also empty of boundless fields of whitish “hoa cai” (flowers of a type of lettuce.)

Though vegetation looks less lush than other times of the year, the landscape still looks gorgeous with imposing mountains.

On the dusty path were groups of kids and teenagers who were building fires for warmth against the bitter cold. Some girls were enjoying simple girlish games.

School girls from a school in Xin Cai Commune are pictured enjoying their cooking game in the chilly weather. Photo: Tuoi Tre.

Local kids and teenagers delighted at a dish which they are cooking. Photo: Tuoi Tre.

A young girl is seen trying to build a fire. Photo: Tuoi Tre.

The fire is strong enough for the youngsters to cook a dish and get some warmth from in the chilly weather. Photo: Tuoi Tre.

Ma Pi Leng Pass, one of the northern region’s most spectacular and the heart of the UNESCO-recognized Dong Van Karst Plateau, is some 20 kilometers away from Meo Vac District.

The breathtaking pass gives a gorgeous overall view of Nho Que River beneath.

The neighborhood, whose beauty has not been known to tourists until recently, is characterized by treacherous terrain and hostile wintry climate.

Its population is entirely made up of Mong people.

A Mong ethnic man and boy are pictured picking up home-grown vegetables to treat their guests to a rustic, cozy meal. Photo: Tuoi Tre.

Before backpackers and tourists set foot on the commune, villagers are almost isolated from the outside world.

Since early on, Mong people have made use of rock by placing them around their stilt-houses to solidify them and keep predators out.

Nho Que River thus serves both as a scenic spot and the villagers’ only water supply.

One of the province’s natural assets is Dong Van Karst Plateau, which was recognized by the UNESCO’s Global Geoparks Network in 2010 as one of the 77 geological parks in the world and the second in Southeast Asia, after the Langkawi Geopark in Malaysia. It remains the only one of its kind in Vietnam to earn the title so far.

The plateau spans over four districts, including Meo Vac.

Located on the altitude of 1,000m-1,600m, the plateau is one of the country’s unique limestone areas, which contains significant imprints of the development of the earth's crust. Up to 80% of the plateau’s karst formations are limestone formed by the elements through different natural development stages.

A survey conducted by the Vietnam Institute of Geosciences and Natural Resources revealed the finding of 13 fossil - geological formations in the Dong Van plateau.

Among them, Chang Pung is the oldest, which dates back to 545 million years ago.

A stunning view of Dong Van Karst Plateau, which was recognized by the UNESCO’s Global Geoparks Network in 2010