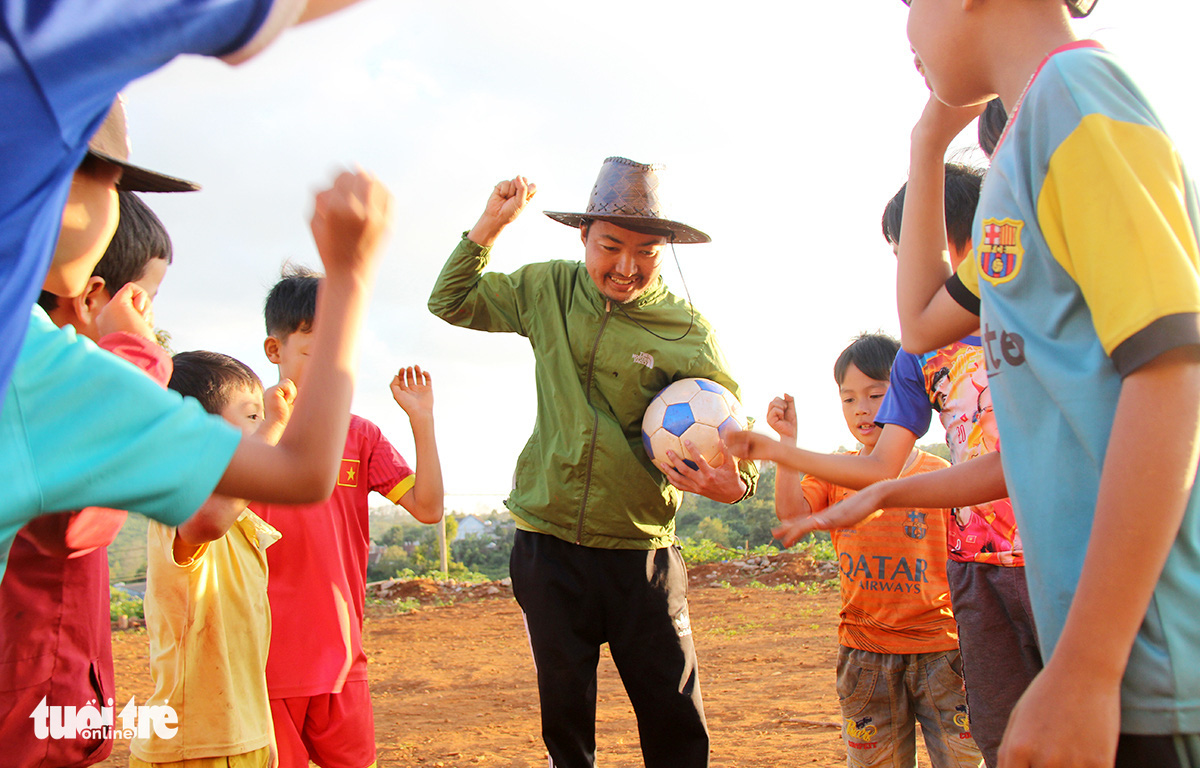 A young Vietnamese man who is critically ill with cancer has been offering free classes to needy kids in his hometown, located in the Central Highlands, while struggling to get a school-building project going over land issues.

Nguyen Cong Noi, 29, was so devastated when he was diagnosed with final-stage colon cancer that he sold off his business and returned to his hometown to spend his final days.

But his desperation was soon turned into enlightenment as he discovered a newfound purpose in helping needy kids in his neighborhood of Cu K’Po, a small commune in Krong Buk District, Dak Lak Province.

His days numbered, Noi now gives his undivided attention to bringing joy to kids and instilling kindness among like-minded philanthropists.

When Tuoi Tre (Youth) newspaper reporters visited him one afternoon last December, “teacher Noi” – as he has come to be lovingly addressed by his young students – was playing football with kids in Cu K’Po.

“The school we have been building, which sits atop a sunflower-covered hill, will be named ‘Cau Vong’ (Rainbow), where [the kids’] ‘true colors’ will be respected and they will learn to become good people,” Noi said with a smile, holding back the pain that has debilitated him after each cancer-treating chemotherapy session.

“I may not live for long, but I believe that when the first Rainbow school launches, many more similar 'schools of joy' will spring up on other sunflower fields.”

Coming from a humble background, Noi studied hard and deservedly earned himself a place in a reputable banking university in Ho Chi Minh City.

After graduation, he worked for a big company with a desirable salary and soon saved up enough money to open his own business, which he ran outside of his full-time job.

It looked as if the young man was all set for a good life when it all came crashing down in August 2016, when he was diagnosed with final-stage colon cancer after going for a medical checkup following a bout of abdominal pain.

“I used to spend all my waking hours working and burned myself out at drinking parties, without heeding my own health, despite occasional telltale signs,” Noi recalled.

“I felt as if I was already dead the day I learned of my cancer.”

Following several operations and chemotherapy sessions, Noi decided to return to his hometown to spend his final days in peace.

Once in his hometown, Noi began teaching English and math to the kids in his neighborhood as well as showing them how to make pastries and grow vegetables.

As news of the youngsters’ rapid progress after attending Noi’s classes spread by word of mouth, more and more parents began to send their kids to his classes.

There were times when the number of students reached over 80, prompting Noi to employ four other teachers to assist him.

“I don’t set targets on how many vocabulary items and exercises my students must cover each day. Instead, I tell them a funny story or design a game for each class meeting and respect their own capabilities and interests,” Noi said.

There is a downbeat note to his mission, however. The project to build his dream school, which he and other philanthropists had been working intensively on and is already close to completion, was recently suspended after the provincial police said it was built on land reserved for national defense and security purposes.

The young man said he had received nearly VND200 million (US$ 8,564) in advance payment from buyers of his avocado crops, which will not be ready for harvest until next year, to cover land rent and construction costs.

With the project now indefinitely suspended, Noi has had to borrow money from his relatives to pay back other philanthropists who had chipped in.

“Once a new land plot for the school is approved, I think everyone will be happy to lend a hand once more,” Noi said hopefully.

“Noi is a smart, agile young man. He has also won everyone’s heart with his various skills such as calligraphy, patisserie, and origami,” said Ho Thi Quynh, a local high school teacher who taught Noi as a kid.

“I’m so glad he stays upbeat despite his critical illness. Hopefully, some other philanthropists will join hands in his school building project.”

The district's leader added that Noi’s school is not a sanctioned social project regarding education and is thus not entitled to state support.

“We’re currently at a loss which government regulations are applicable in this case. If Noi can partner with a qualified individual or organization, I think he will be able to turn his great idea into a reality,” Thang stressed.