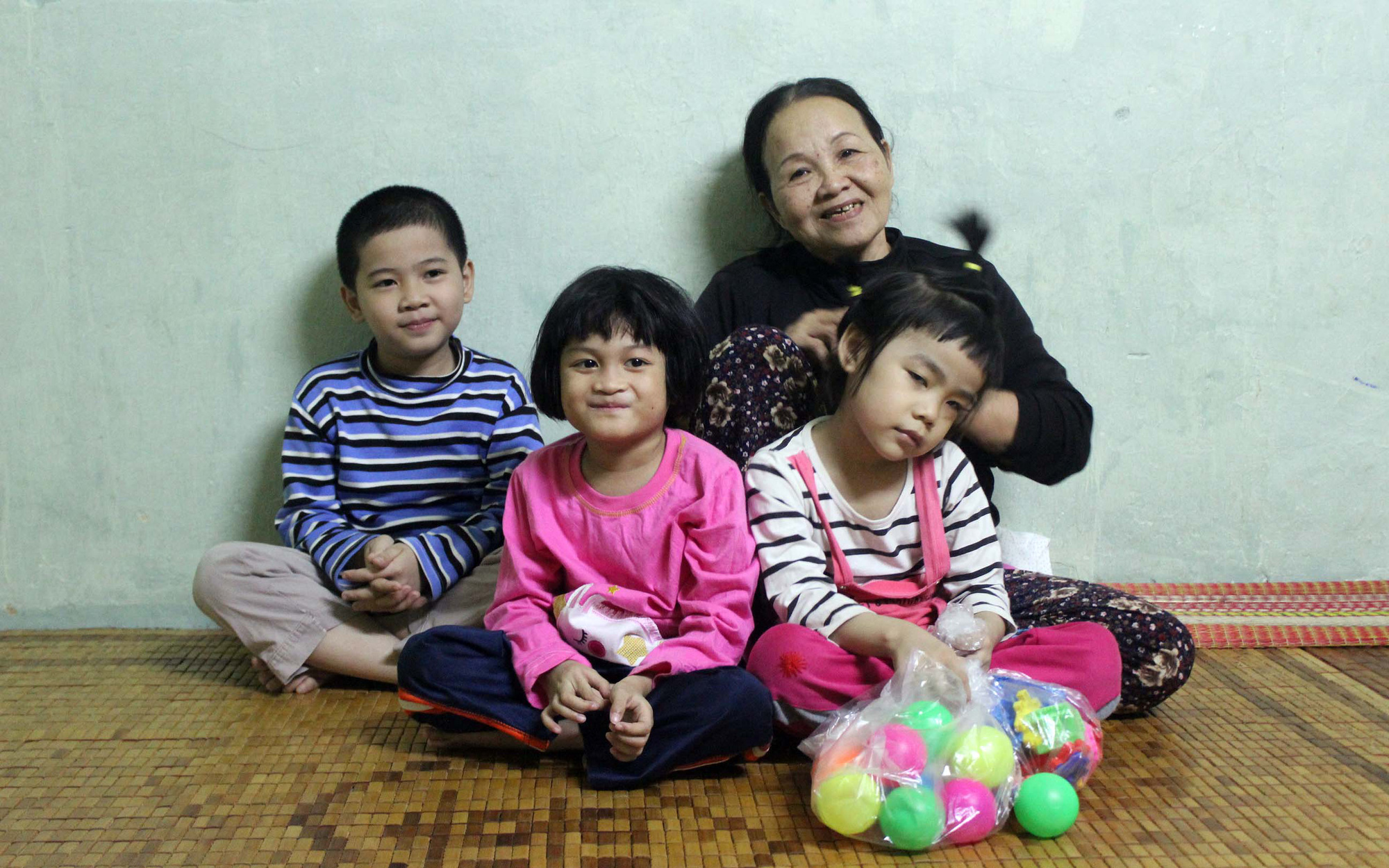 Despite having no money, a Vietnamese woman in her 60s cares for three orphaned children as if they were her own, showing the 'grandchildren' the love that trumps the troubles of an impoverished life in south-central Vietnam.

Nguyen Thi Dung, 65, has spent the last 15 years scraping together a meager living through scrap collecting and janitorial work in Nha Trang, a popular touristy city in the south-central part of Vietnam.

The little money she does earn from her work goes directly to supporting her ‘grandchildren’ – three orphaned kids she cares for as if they were her own flesh and blood.

As Dung pushes open the door to her shabby rented room, the drab studio is immediately brightened up by the sound of her three ‘grandchildren’ rushing to hug her, exclaiming "grandma’s home!"

Su, seven, and his twin sister, Na, along with Vit, five, have been staying with Dung since before they could toddle.

“I just couldn’t make ends meet in my rural hometown neighborhood, so I moved here after my husband’s death,” Dung shared.

That was in 2004. Since then, she has been living in the same run-down studio flat eking out a modest living through odd jobs around town.

One of those odd jobs began seven years ago when a young woman gave birth to twins and asked Dung to babysit them. When they were just five months old, the single mother left her babies with Dung and never returned.

“With their mother gone, the infants wouldn’t stop crying. I was worried sick because I could hardly feed myself. I thought of taking them back to my hometown, but I had way to make a living there,” Dung recalled.

Fortunately, Dung’s youngest son, Duong, who also does odd jobs in Nha Trang, did his best to chip in and raise the three children.

“There were times when we were plunged into sheer poverty and despair. Duong always said we should try our best to bring up the babies. He spent all the money he earned buying milk for them,” Dung said.

Hard-pressed, Dung even resorted to asking her neighbors for food, milk, and clothes.

“Fortunately the twins were happy to eat almost any kind of food we gave them and rarely got sick,” the ‘grandmother’ said proudly.

Dung did not begin caring for the third child, Vit, until 2015 when Vit’s mother began asking her to babysit. After a year, the mother never came to pick up her child and Dung found herself caring for the girl full-time.

Eventually, she learned that the woman had been sentenced to seven years in prison for drug trafficking. She has so far served four.

When Dung brought the baby to her biological relatives in Nha Trang, they refused to care for her and Dung found herself taking care of a third child.

“I can’t be away from home for more than one hour and usually don’t lock the door. The kids fear they will be marooned once again or be taken to an orphanage,” Dung said.

Dung plans to have Na and Su registered for permanent residency and birth certificates with her younger brother’s family in her hometown and send them to school.

Su has finished the grade-one curriculum after attending free home tutoring sessions held by a group of students last year.

“I love the kids even more dearly than my own grandchildren and have rejected several adoption offers. I’ve stayed put here for years in the hope that their mothers may return one day to take them home,” Dung shared.

Exhausted from daytime jobs, including cleaning for a hairdressing salon which earns her VDN300,000-400,000 (US$13-17) each month, peeling scallion heads for pickles, and doing laundry, she summons up what is left of her strength to scavenge for scrap at night to feed the three children.

“I always try to smile in the face of adversity. I don’t care about myself, but I can’t stand the idea of parting with the kids,” the senior woman said, adding that she is thankful for the help she has received from her long-time landlord, neighbors, and the local government.

“It’s brave of Dung to fend for those three small children despite her old age and lack of stable incomes or family support. She gives them all that she can get her hands on,” Vo Van Dang, a 70-year-old security guard at a motorbike store nearby, said.