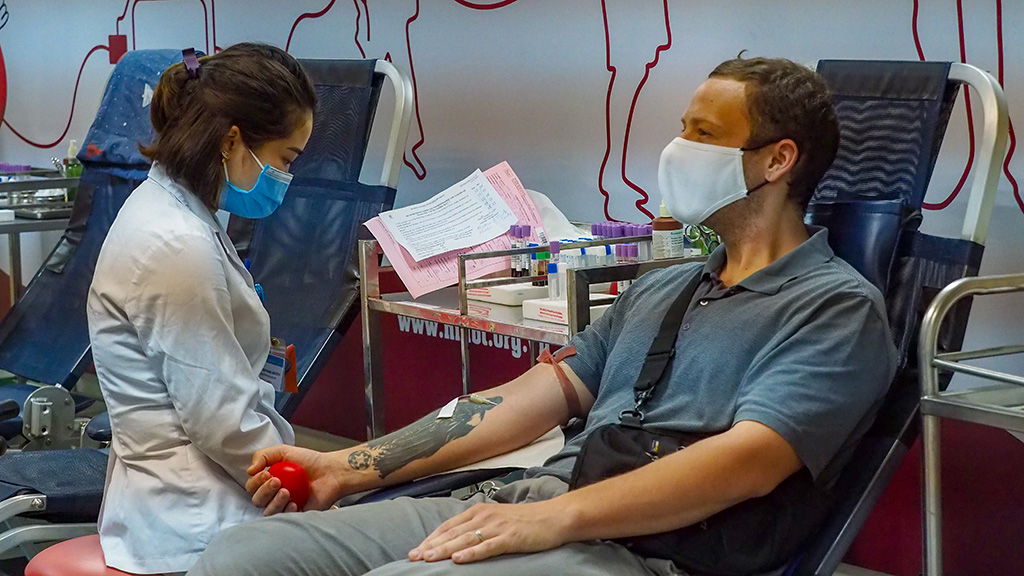 While many fear that simply visiting a hospital might put them at risk of contracting the novel coronavirus disease (COVID-19), American Tandy Nathan Jackson is among the few who have risked exposure to donate blood amid a nationwide shortage.

Blood shortage is common in Vietnam during the first few weeks following the Lunar New Year holiday, or Tet, but this year that dearth has extended for months because many fear visiting the hospital to donate is risky business in light of the ongoing COVID-19 epidemic.

The blood bank at the National Institute of Hematology and Blood Transfusion in Hanoi is petering out as the institute approaches nearly two months of averaging less than 100 daily donations.

Spooked off by the risk of coming in contact with medical workers or patients who have been exposed to COVID-19, few have been willing to donate blood and dozens of companies and organizations who had scheduled blood drives have canceled them.

Even the institute, despite fears the blood bank will soon dry up, has opted to postpone several of its own drives planned for locations throughout Hanoi in order to comply with restrictions on social gatherings currently being enforced throughout the country.

At the end of January, as many Vietnamese were winding down their Tet holiday and Vietnam was dealing with just 16 COVID-19 infections, the National Institute of Hematology and Blood Transfusion’s reserves were already running low.

Even reserves of type-O blood, the most common blood group in Vietnam, seemed to be nearing their last drops.

The institute collected just 500 donations in the first two weeks following the holiday, a frighteningly low number compared to its typical daily average of 1,200 donations.

A nationwide blood drive held about a month after the holiday garnered over 1,000 donations during each day of the event and campaigns held by dozens of companies and organizations helped give the blood bank a boost, but levels have since dropped to an all-time low.

During that time, medical staff themselves donated blood, accounting for more than 5,000 units, while other individuals have accounted for 9,000 donated units. Each unit is equal to 250 milimeters of blood.

These individual donations account for just one-fifteenth of the demand, according to Le Thanh Hang, a public relations associate with the institute.

This donation boom came to an abrupt end in early March when Hanoi announced the country’s 17th confirmed infection.

“Right now we’re surviving off just 70 donations each day when we really need 1,500 to meet the daily needs of our 170 hospitals. Yesterday we saw an uptick, with nearly 200 donations given,” Hang said, adding that the institute’s reserves often hover around 6,000 units, compared to its normal average of 9,000 units.

Without a massive spike in donations, Hang said, the institute would run out of blood in just ten days.

The institute's blood donation ward, which typically has seating for 20, now holds just six empty reclining chairs, each placed a meter apart to ensure social distancing and limit the possibility that a COVID-19 positive patient might unknowingly spread the virus.

Unfortunately, this precaution does not seem to be doing much to quell fears.

Among the 24 cities and provinces nationwide with confirmed COVID-19 patients, Hanoi is currently Vietnam’s ‘epicenter’ with 73 cases having been confirmed as of Monday.

Although blood donation centers are carrying out preventive measures such as sanitization, mandatory health declarations, and physical distancing, many still fear just visiting the centers makes them a sitting duck for the disease.

Others, however, are willing to take that risk in the hope that their blood can save lives.

Among them is Tandy Nathan Jackson, an American national who moved to Hanoi three years ago to work as an English teacher.

With all foreign language schools and colleges closed since January, the English teacher has decided to use some of his free time to donate blood.

His visit to the hematology facility is an energetic answer to an appeal for expats in Vietnam to donate blood.

“I want to do something for your country,” said Jackson, whose mother works as a nurse in the U.S., adding that he had regularly donated blood in his home country.

Jackson’s sentiment is one shared by all those still willing to donate their precious blood.

Son, a 58-year-old resident of Ba Dinh District, shared that her heart sinks at the sight of the many desperate parents who rent rooms near the National Pediatrics Hospital while they await life-saving transfusions for their young children suffering serious blood diseases.

“I really hope my blood can help save someone’s life, particularly during such a difficult time,” she said.

Lanh Van Dong is one of the many people who benefit from these donations.

Dong has Thalassemia, an inherited blood disorder that causes the body to make an abnormal form or an inadequate amount of hemoglobin which can lead to bone deformities.

Dong was just five when he was diagnosed with the disease and has visited hematology facilities on a monthly basis for the past 27 years. At 32, the man could pass for a fifth-grader.

Hoang Thi Loan and her husband also depend on blood donations for their son, a seven-year-old who was diagnosed with Thalassemia six years ago.

The couple left their rice paddies in Nam Dinh Province, 95 kilometers from Hanoi, to be nearer to a blood transfusion center.

Now, the couple is concerned that there might not be enough blood to give their son the treatment he desperately needs.

Seventy scheduled donation registrations of approximately 12,000 units have been postponed since March 7, Bach Quoc Khanh, head of the National Institute of Hematology and Blood, confirmed.

The facility is working hard to ensure absolute safety for blood donors, recipients, and medical workers while calling for donations to keep supply up with demand.

The novel coronavirus, which first emerged in the central Chinese city of Wuhan in December 2019, has infected over 721,300 and killed nearly 34,000 globally as of Monday, according to Ministry of Health statistics.

Vietnam has confirmed 194 COVID-19 cases, with 25 having already been discharged from the hospital.

No fatalities related to the disease have been recorded in the country.