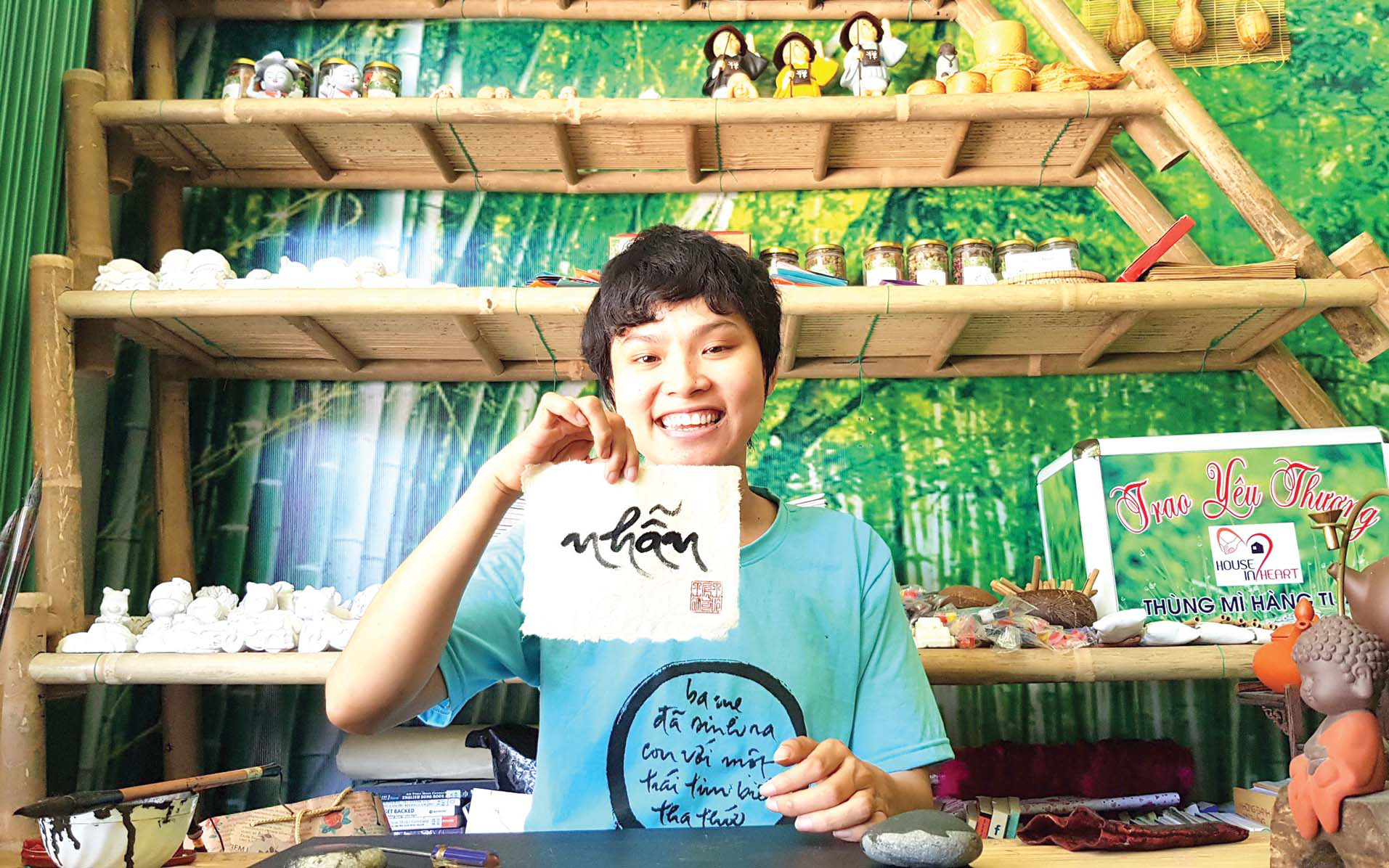 The soul-healing spot of a disabled Vietnamese woman

Once a gifted athletics champion, Phan Thi Khoe lost her ability to walk due to a tumor in her spinal cord.

Instead of giving up, this young girl is now managing a spot for disadvantaged people and youths who want to pour their hearts out in an attempt to help each other heal.

For eight years now, Khoe has been tormented by a cancerous tumor which has caused her to lose the ability to walk.

However, she has come to realize the unconditional love of her family and friends can help her through anything.

During a monastic tour in Thailand, Khoe had a chance to meet Tam Nguyen, who said she could see the special person in Khoe that can inspire and spread positive energy to the community.

“Illness did not knock Khoe down but made her stronger," Nguyen told Tuoi Tre (Youth) newspaper about the establishment of their special store, Gieo Mam (Sowing the Seed).

"I wanted Khoe to spread this energy to more and more people so we started up this store,”

Back to the race

Khoe can never forget how her carefree life turned to tragedy when an intense pain rose from her neck, slowly paralyzing her legs.

It has been ten years since she was last able to make a single movement with her lower limbs.

Despite growing up poor in the Huong River area in Hue, the capital city of Thua Thien-Hue Province in central Vietnam, Khoe saw her parents knock on the doors of many major hospitals in a desperate search for a way to treat their daughter's condition, but all was in vain.

A fiercely independent girl, the sudden inability to do most daily activities without assistance led Khoe to attempt suicide more than once.

“During a treatment trip in [the northern city of] Hai Phong, I came across a piece of writing entitled 'Chet khat ben canh dong song' [Dying of Thirst by the River] by Zen master Thich Nhat Hanh. At that time, I burst out in tears as I realized the existence of endless love from my loved ones all this time,” Khoe said.

“For all those years, my family raised and took care of me but I never had a chance to say thanks, so why should I inexplicably end my life?”

Doctors in Hue said she could recover 95 percent of her movement with a tumor surgery. The surgery lasted eight hours and was remarkably successful.

After undergoing follow-up physical therapy, Khoe could feel with her legs again.

“The happiest thing was that I was able go to the restroom by myself after seven years of suffering. I no longer need help from my parents,” Khoe said.

The legs that once brought her a gold medal in track and field are gradually regaining the strength of a champion.

Bringing smiles to those in need

The Gieo Mam store is located on the way to Thien Mu Pagoda in Hue.

People who come here can easily recognize Khoe by the bright smile that she always wears as she sits in front of the store and writes calligraphy.

On the day your correspondent met Khoe at the store, a woman with a round of lottery tickets in her hand entered the shop and went straight to the small Buddha statues.

“I saw the shop was open, so I came to give her a hand to dust the Buddha statues,” the woman told Tuoi Tre.

That woman is Nguyen Thi Bong, who usually comes to Gieo Mam at noon, whenever she cannot sell lottery tickets, to talk about life.

“After talking to Khoe a little, I feel less tired because she's paralyzed but never sad. She smiles all the time,” Bong said.

Gieo Mam is like a second home for lottery ticket sellers like Bong to talk and pour their hearts out to Khoe.

Although it has been open for just about six months now, the store is a haunt of young people with disabilities.

They come here to listen to Khoe’s story about her life and how she handles adversity.

Many young people also often drop in to talk about love and difficulties in life with Khoe. According to the woman, from the opening day up until now, the store has been operating as a non-profit.

“Gieo Mam is a place which can take away your sorrows and give back love and positive energy. The biggest profit of the store is not money but that everyone who comes here receives positive vibes,” Khoe said.