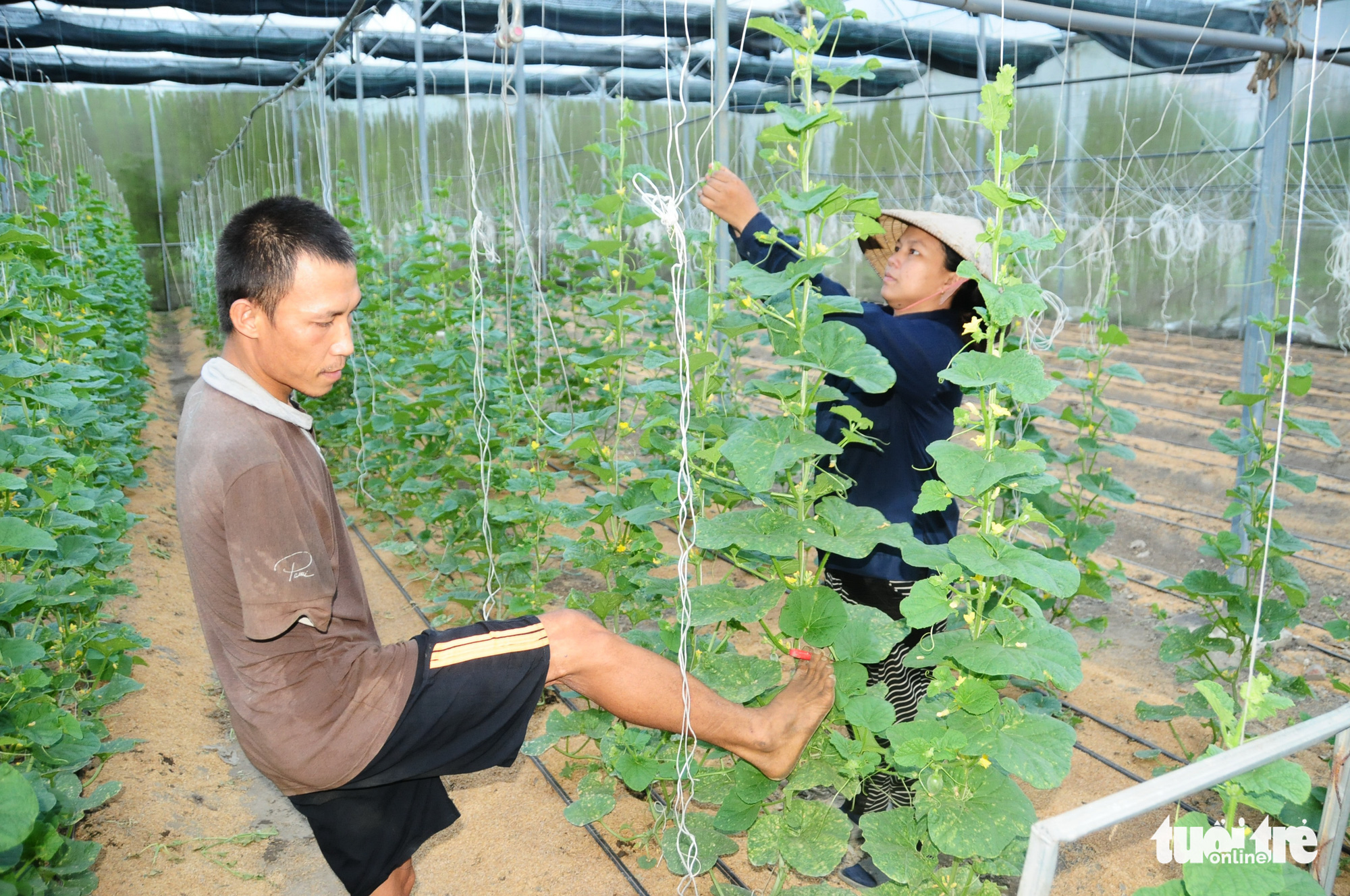 Tran Thi Minh Thu and Nguyen The Cuong, her husband, spent eight years persuading her father to accept their love and marriage.

He fiercely rejected their plan because both the father and Cuong have no arms.

In the end, it was the grandchild that connected them all, uniting the family members.

After losing his arms following an electric shock at work at the age of 22, Cuong has been brave enough to stand against all the odds.

The incident happened while he was doing his part-time job to cover college expenses.

It left him with a burn over 97 percent of his body surface and cost him his arms.

The college student at the Da Nang University of Technology fought hard to regain his passion for life, dropping out of school to come to terms with his new situation.

The first task he assigned himself was to learn to write using one of his feet.

“My foot was bleeding and hurting. My crotch and back were aching,” he said.

“For three days I locked myself up to practice. Finally, I could write a neat word.”

In 2005, the armless man joined a charity program that offered artificial arms to the disabled in Ho Chi Minh City.

There, he met Thu, his future wife.

The girl was escorting her father to the event for the same purpose. He, too, had lost his arms just like Cuong.

According to Thu, her father showed compassion toward the 23-year-old man with no arms.

He wanted to inspire Cuong with his own example, so he took to calling the young man regularly to check on him, leaving the task to his daughter every now and then.

The two got closer ever since.

“After having contacted each other by phone for three years, one day my father stormed in, asking ‘Did you fall in love with him?’ and then he slammed the door on me,” she recalled.

“I knew it was the start of a catastrophe.”

Despite the hostility from her father, the two were secretly in love.

Thu graduated from a teacher's college and found a job at an elementary school near her family's house in the Central Highlands province of Gia Lai.

As years went by, Cuong and Thu thought they needed to persuade their family to approve of their marriage rather than go on in secrecy.

Thu’s father avoided Cuong every time he visited them in Gia Lai from his hometown, Quang Nam Province located in central Vietnam.

At the end of his rope, the armless man knelt down by the front door asking for her father to see him.

He did so every weekend for two years.

Thu’s father did not want her to have the unhappy life he imagined for the couple with Cuong’s disability, so he kept up a stern attitude.

“Tell him to keep kneeling down and go home when he’s tired,” he told his daughter.

The couple sought help from their parochial priest as they were both Catholic followers, but her father stood his post despite the several visits from the priest.

As the Catholic ceremonial procedure for a wedding includes the presence of a priest, Thu and Cuong would not be religiously considered man and wife without this step.

But they were ready to do what it took.

After five years of failed efforts, they made up their mind to get married on July 12, 2009.

It was a strange wedding reception by the standards of Vietnamese culture. There were no invitation cards and the guests numbered only about one hundred.

A regular Vietnamese wedding reception party normally has a lot more guests, with at least 300 in attendance.

From their accounts, they hurriedly organized the wedding party when Thu came to Cuong’s house in Quang Nam over several days in the summer of 2009.

Rather than sending out invitation cards, his mother made direct phone calls to friends and relatives.

Within three days, the couple was wedded. They even bought a wedding gown, but it was long after that when they finally got to have their wedding photo shoot.

Tran Quan Khai, Thu’s brother, said that even though he was only eight years old at the time, he understood the power of their love and why his father was strongly opposed to it.

“To be where they are now, my sister and her husband must have mustered all their strength. Now my father loves them the most.”

The fruit of love

Now they have two children and go to work every day. Having no arms did not deter Cuong from working.

Using only his feet, he plays computer games professionally, runs an electronics store, translates documents between languages, and works as a mechanic.

Now the man and wife also have an organic farm in Da Nang.

Thu said that all the choices they have made were right.

“I can’t explain love, but we’ve always been happy,” she said.

After the wedding, she left her teaching job in Gia Lai and moved to live with Cuong in Quang Nam.

Angered by their actions, her father sent her a message by post. It read, “You disobeyed me. Don’t ever come back and don’t ever call me father again.”

She and her husband still made it back home to visit the old man, but he refused to talk to them for a few more years.

But in 2012 when she took her child back home, they finally got to talk.

“The baby’s crying,” her father shouted at her.

Then he lifted his grandson, calmed the tiny baby, and broke down in tears himself.

Their whole family was whole once more after eight years.

He decided to sell off his property and to support his son-in-law in his organic farming business in Da Nang, where the coouple is living now.

He even left his job and moved to help his daughter’s family by taking care of the baby and doing housework.

“I have never hated him for a single second. He simply wanted the best for me,” Thu said.

“After everything, he took us to a church in Da Nang so that we could perform a formal Catholic marriage ritual.”