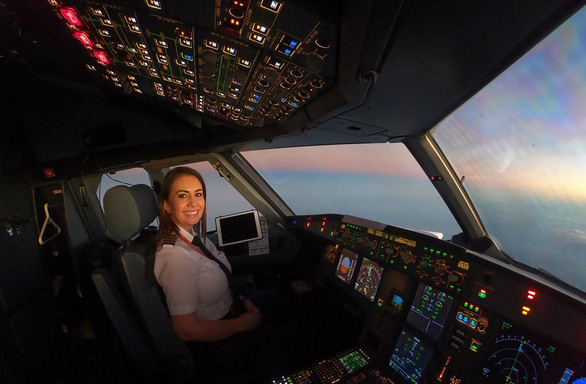 Meet the women who fly for Vietnam's private airline

Even though they come from around the world, they are bonded by their mutual confidence, efforts and aspirations to conquer the sky. They are female pilots of Vietnam’s privately-owned budget carrier Vietjet Air.

Maria Cristina Maldonado is the first female Colombian pilot working in Vietnam and among the first American captains operating 'Iron Bird' Airbus A320 in Southeast Asia.

She started her career at Colombia’s flag carrier Avianca, flying for them for 20 years before heading to Vietnam to work for Vietjet.

Maldonado got the first glimpse of the budget carrier in a local newspaper, learning it was a much-loved company in Vietnam.

"They have witnessed the impressive development of aircraft and expansion of both domestic and inner-Asian routes.

"I wondered how they can quickly win over customers and become one of the best workplaces in Asia.

"The more I searched for it, the more I got interested.”

She was surprised and inspired knowing Vietjet was established and operated by talented women, chairwoman Nguyen Thanh Ha and CEO Nguyen Thi Phuong Thao, for example.

“The image of a woman who leads fits my ideal," Maldonado recalled the decision-making moment.

"I must come to Vietnam."

She is now an excellent pilot for the carrier who has participated in repatriation flights bringing Vietnamese citizens stranded overseas due to COVID-19 as well as delivering humanitarian aid to the central region of Vietnam during the historic flood in October 2020.

A miracle world in cockpits

“I flew on a flight operated by a female pilot and was impressed by her style and aura," Park observed.

"She became a role model for me to pursue a career as a pilot."

Park started her new journey at the age of 33.

At the time, her family and friends advised her to think over it again, saying that everything seemed to be too late and she should have focused on marriage like many other Korean women.

It took her a long time to think and persuade her parents before leaving for the U.S. to study.

“Women and men are present at every position, from pilots to cabin attendants, mechanics to engineers," said Park.

"No matter where we come from, we speak the same language.”

Her most memorable flight was from Incheon to Ho Chi Minh City because her parents were among the passengers.

They burst into tears of pride hearing her name announced in the list of cabin crew members.

Similar to Park, Kang Min Hee had an amazing 'take-off' from a cabin attendant to a pilot.

“Anytime I looked into a cockpit, I was amazed by how pilots could remember and work with hundreds of buttons, switches, and joysticks," said Kang.

"The world inside a cockpit is wonderful and appealing.

"I had a desire to take that position.”

Most of the trainees at her aviation school were men.

“It seems to have an invisible barrier preventing women from pursuing this job," she said.

"However, more and more women are breaking the long-existing prejudice to join the industry, which was supposed to be exclusive for men."

Leaving South Korea to work at Vietjet, Kang was proud of the family-like working environment there.

Recalling a night in Khanh Hoa Province’s Cam Ranh City, when she got a fever and received tender care from the other crew members, Kang said she realized the airline was her second home.

She also admires CEO Thao – the company’s 'captain' who always nurtures big dreams and inspires her employees to make them come true.