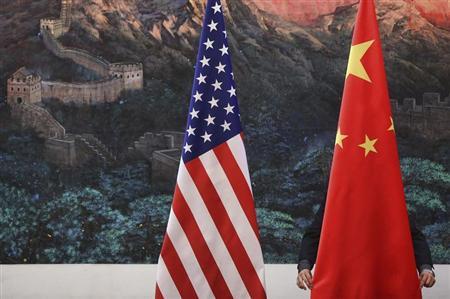 With ties between Washington and many close allies strained because of eavesdropping revelations and differences over U.S. policies in the Middle East, the Obama administration can take some comfort from an improvement in ties with China.

A year after China's President Xi Jinping took over the helm of the country's ruling Communist Party, senior U.S. officials say they see increased cooperation on a range of issues from climate change to North Korea's nuclear weapons ambitions. They also regard greater bilateral military contacts as an important safety valve if there are any potential flare-ups.

On the economic front, Washington is focused on China's November 9-12 Communist Party conclave where Xi's blueprint for making the world's second-largest economy more open is expected to be unveiled.

Xi's administration already has spawned optimism with an agreement to reopen bilateral investment treaty talks and a pilot free trade zone in Shanghai that augurs well for deeper reforms to address Chinese investment and trade barriers. Both could help dent the $300 billion annual U.S. trade deficit with China.

Not all is rosy. Serious fault lines remain over issues that have long vexed the Sino-U.S. relationship, such as human rights. Western experts and Chinese activists are concerned that China's record on human rights may be worsening under Xi, who became China's president in March, given there have been crackdowns on lawyers, activists and Internet opinion leaders.

Potential discord also lurks in China's recent increasing recourse to what its critics call gunboat diplomacy in maritime territorial disputes with Asian neighbors, including U.S. allies such as Japan and the Philippines.

But officials from both countries say they are committed to what China calls a "new model of major country relations" - a Xi mantra that aims to minimize Sino-U.S. rivalry as China's global power grows.

To Washington, the concept means "there is room on planet Earth for a rising, strong, stable, prosperous China and a United States that continues to serve as the champion of a liberal, democratic, free-market and rules-based system," said Daniel Russel, the State Department's top Asia diplomat.

Washington and Beijing intend to "avoid a mechanistic dynamic in which a rising power and an enduring power were inevitably destined for conflict," he added.

The most common concrete example U.S. officials give of a better working relationship is North Korea, whose nuclear weapons and ballistic missile programs are seen as one of Asia's most serious security threats.

Washington has long sought to convince Beijing to do more to rein in Pyongyang, a Chinese ally since the Korean War. North Korea's nuclear test in early 2013, the latest of three since 2006, was accompanied by threats of nuclear attack on the United States and South Korea.

"That's in part because the cycle of provocation that was taking place in the spring was concerning to them because it was destabilizing the region ... and ultimately it was not consistent with their own interest," he told Reuters.

China, often criticized by the United States and its allies for weak enforcement of U.N. Security Council sanctions on the North, last month published a detailed list of technologies and goods banned from export to North Korea because of their potential use in weapons of mass destruction.

The narrowing of differences on North Korea was a key outcome from Xi's informal summit with President Barack Obama last June in Rancho Mirage, California - a desert retreat that allowed the two leaders to meet for eight hours over two days.

That informal summit, mainly designed as a trust-building exercise, also produced an agreement to reduce the use of greenhouse gases and to launch a bilateral working group to hold regular discussions on cyber-security.

"The U.S. and China are cooperating not on boutique projects, not on off-Broadway, where it doesn't really matter, but on priority, critical issues that genuinely matter to both of our people and genuinely matter to the region and the world," said Russel, who attended the summit, in an interview.

In early 2012, when Xi was China's vice president, he toured the United States as a guest of U.S. counterpart Joe Biden, visiting a small town in Iowa where he did a brief home stay in 1987, as well as Los Angeles and Washington.

The Washington trip included a visit to the Pentagon, which helped set up a packed 2013-14 calendar of exchanges between the two countries' militaries. Military-to-military ties have long been the weakest link between the two powers.

U.S.-China ties have warmed but then cooled in the past, and analysts warn that Xi's agenda may only start to become clearer after this month's Communist Party Central Committee Plenum sees him put his full stamp on Chinese policy.

On economic policy, Americans see room for optimism, based on Xi's record since the 1990s as a business-friendly party and government leader overseeing roaring economies in Shanghai and the vibrant coastal provinces of Fujian and Zhejiang.

"Everything about his past where he served before in China indicates that there are reasons to be optimistic that he will take a more pro-market approach than his predecessor," said Kenneth Jarrett, president of the American Chamber of Commerce in Shanghai and a former U.S. diplomat in China.

The U.S. Treasury on Wednesday said China was not a currency manipulator and had allowed the yuan to appreciate 12 percent against the dollar since June 2010, while adding that the Chinese currency still appears undervalued. But in a semiannual report to Congress, the criticism of China was muted and less prominent than an attack on Germany, which was accused of hampering economic stability in Europe and hurting the global economy because of its focus on exports rather than boosting domestic demand.

On human rights and regional security, however, there are more question marks.

In less abstract terms, China's widening crackdown on bloggers, lawyers and activists has seen the detention or arrest of scores if not hundreds of people. nL5N0IC2J8]

Obama, while not dropping the human rights issues, appears to have decided not to turn it into a make-or-break issue for Sino-American relations.

Xi has broken with Beijing's traditionally reactive and defensive foreign policy, said Stephanie Kleine-Ahlbrandt of the U.S. Institute of Peace. She sees Xi testing U.S. allies and pushing back against Obama's decision to shift diplomatic and security attention to Asia.

"Xi Jinping has come in and essentially pivoted on a dime and is now the first to really embrace China's role as a 'great power' and he's making foreign policy with a great power mindset," she said.

U.S. officials say they do not expect Beijing to escalate its maritime disputes with Japan or other smaller neighbors because it would risk harming China's economic growth.

"If Xi Jinping wants to realize the goal of the Chinese dream, of becoming a middle-class country by 2049, the 100th anniversary of the PRC, they're going to want to do that without any kind of disruption or distraction," said a senior U.S. official.