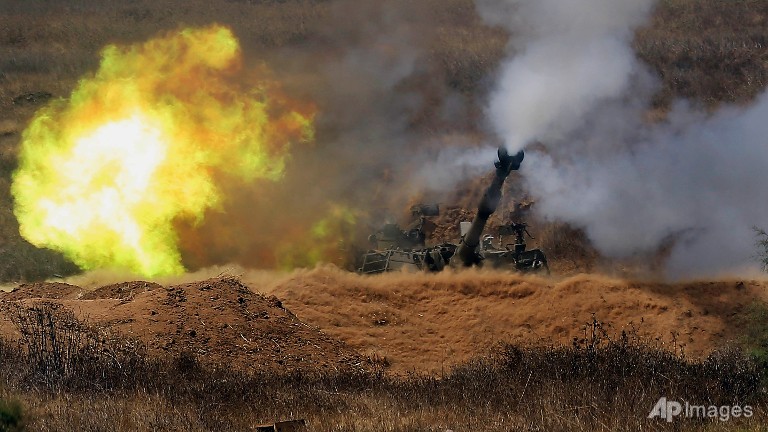 UNITED NATIONS, July 28 - The UN Security Council on Monday called for an immediate humanitarian ceasefire in Gaza to allow for urgent aid to reach civilians as the conflict between Israel and Hamas entered its third week. The 15-member Council released a statement shortly after midnight Sunday calling for the truce during the Muslim Eid festival marking the end of Ramadan. The Council expressed "strong support" for an "immediate and unconditional humanitarian ceasefire," and urged all sides to accept and fully implement the truce. It voiced "grave concern regarding the deterioration in the situation as a result of the crisis related to Gaza and the loss of civilian lives and casualties." More than 1,030 Palestinians have died in the fighting as well as 43 Israeli soldiers. Palestinian representative to the United Nations, Riyad Mansour, expressed disappointment with the statement, saying it fell short of a formal resolution demanding that Israel withdraw its forces from the Gaza Strip. "They should have adopted a resolution a long time ago to condemn this aggression and to call for this aggression to be stopped immediately," said Mansour following the meeting. "We are disappointed in that sense," he said, adding that the Palestinians would continue pressing the Security Council to move toward a formal binding resolution. The emergency session came after Israel and Hamas ignored calls for a truce, with Israel pounding Gaza with artillery on Sunday after a night of rocket fire from Hamas. The two sides observed a 12-hour pause on Saturday, allowing Gaza medics to pull bodies from rubble. The Council said "civilian and humanitarian facilities, including those of the UN, must be respected and protected" following outrage over the Israeli attack on a UN-run school in Gaza this week that left 15 dead. The Council called on Israel and the Palestinian Hamas to try to reach a ceasefire based on the Egyptian initiative, and applauded US Secretary John Kerry's efforts to broker a deal.