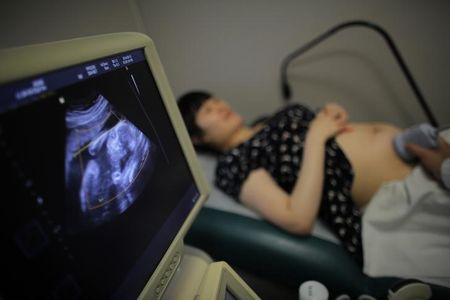 Like most Asian nations, China has a traditional bias for sons, who are seen the only guarantee to pass on the family line.

Many families abort female foetuses and abandon baby girls to ensure their one child is a son, with about 116 boys born for every 100 girls last year, against a global average of 103 to 107.

The new campaign will run under November, and concentrate on health centres and family planning institutions, as well as illegal fertility agencies, clinics and itinerant doctors, the report said.

The government will also tighten controls on medical equipment and medicine used in both ultrasounds and abortions, and blacklist any organisation found to be complicit in either activity, Xinhua added.

Researchers have warned that large sex-ratio imbalances could lead to instability as more men remain unmarried, raising the risks of anti-social and violent behaviour.

The problem has stoked the kidnapping of women to be forced into marriage, and the trafficking of children.

In late 2013, China said it would ease family planning restrictions to allow millions of families to have two children in the most significant liberalisation of the one-child policy - originally introduced to slow population growth - in decades.

Critics say the relaxation of rules was too little and came too late to redress substantial negative effects on the economy and society. Analysts say China faces the prospect of becoming the first country in the world to get old before it gets rich.