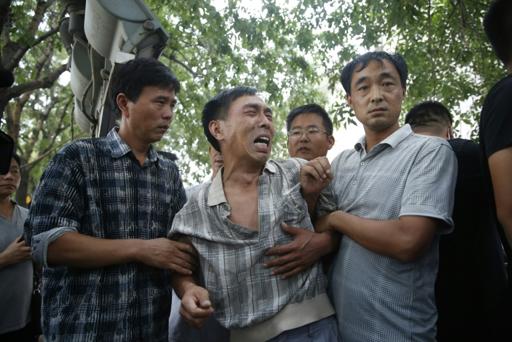 Rescue personnel battled to clean up hundreds of tonnes of cyanide at the site of huge explosions in northern China on Monday, as state-run media lambasted officials over their response to the blasts which killed 114.

The August 12 explosions at the hazardous goods storage facility in the port of Tianjin set off a giant fireball, devastated a vast area and raised fears over the impact of toxic pollutants.

The company operating the site had been storing hundreds of tonnes of cyanide, reportedly nearly 30 times the allowed amount, and while officials have insisted that the air and water in the city is safe, residents and victims' relatives have voiced scepticism.

"Around 700 tonnes" of sodium cyanide was being stored at the warehouse where the blasts took place, He Shusheng, a Tianjin vice mayor, told a news conference.

The Beijing News, citing storage plans it had seen, said the warehouse was only authorised to hold 24 tonnes of the substance.

A huge, "very complicated and difficult" clean-up was underway on Monday, said He, made harder by the presence of 16,500 empty shipping containers and amid fears forecast rain could release hydrogen cyanide gas.

Authorities had built up sand and earth barriers around the blasts' 0.1 square kilometre "core area" to prevent any leakage of cyanide or other pollutants, said He.

The closest water test point to the blast site revealed cyanide 27.4 times standards on Sunday, officials said without specifying the quantity, but not beyond the cordoned-off area.

Sodium cyanide had been found as far as around one kilometre (0.6 miles) from the blast site.

Military chemical and nuclear experts have been brought in, as have experts from producers of sodium cyanide -- exposure to which can be "rapidly fatal", according to the US Centers for Disease Control.

Environmental campaign group Greenpeace said Sunday it had tested surface water for cyanide at four locations in the wider city and had not detected high levels of the chemical.

Officials said Monday the death toll from the disaster had risen to 114 with 70 people missing, but cautioned that some of those could among the 60 corpses yet to be identified.

All kinds of chemicals mixed

Authorities have faced criticism over failing to uphold regulations surrounding the site's operation, notably requirements that warehouses stocking dangerous materials be at least one kilometre from surrounding public buildings and main roads.

Chinese media reports on Monday said the son of a former police chief of Tianjin port was a major shareholder in the company operating the site, Rui Hai International Logistics.

The reports in web portal Sohu and the Beijing News illustrate the oft-criticised links between business and official elites in China, which have raised concerns that firms with strong government ties face lax enforcement of regulations.

A day earlier, Chinese Premier Li Keqiang visited the city to meet with victims and direct rescue efforts, a common move after major disasters in the country.

"The situation is very complicated," the Communist Party number two told Hong Kong's i-Cable TV. "All kinds of chemical products have been mixed."

"We must investigate the accident, find the cause of the blasts and anyone who acted illegally will be severely punished."

Chinese state-run media on Monday lambasted officials for a lack of transparency over the explosions, echoing frustrations voiced by Tianjin residents, victims' relatives and netizens over what they say has been a slow release of information in the aftermath of the explosions.

"During the first dozens of hours after the blasts, there was scant information offered by Tianjin authorities," the Global Times said in an editorial.

"Tianjin is not an exceptional case in terms of the inadequate disaster-response work," the paper, which has close ties to the ruling Communist Party, wrote.

The government-published China Daily, meanwhile, noted that "many questions... remain to be answered" over the blasts.

"Not surprisingly, the lack of verified information has resulted in conspiracy theories emerging," it wrote.

State prosecutors on Sunday said they had launched an investigation into whether there had been any "abuse of power or dereliction of duty", Xinhua said.

The official and media comments may indicate that authorities will look to hold individuals responsible for the disaster.

But accusations of corruption were raised when more than 5,000 schoolchildren died in a 2008 earthquake in the southwestern province of Sichuan, crushed to death when their shoddily-built classrooms collapsed.

No one has been prosecuted over the Sichuan casualties.