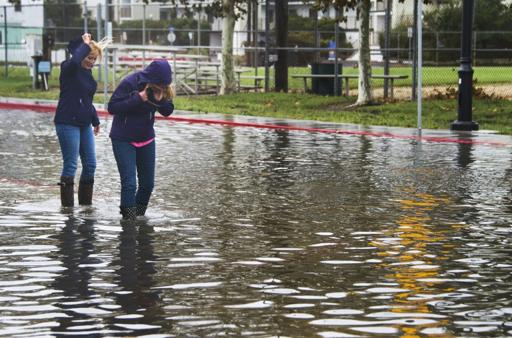 Streets in US southeast submerged after heavy rain

Relentless rain left large areas of the US southeast under water and forecasters warned that more heavy downpours could trigger historic flooding in the crucial next 24 hours.

The states of North and South Carolina have been particularly hard hit, but the driving rain in recent days has spared almost none of the US East Coast and forecasters say the worst is not over quite yet.

Experts say it is a separate weather system from Hurricane Joaquin, a powerful Category Four storm that battered the Bahamas, destroying homes, and was threatening to do much the same to Bermuda.

South Carolina Governor Nikki Haley has warned of the possibility of record-setting rainfall over the weekend and President Barack Obama on Saturday issued an emergency declaration for the state, ordering federal aid for areas affected by flooding.

Some streets were submerged in the historic old town of Charleston, South Carolina, an AFP reporter said.

Most of the restaurants and bars were closed because of the rising water.

"We are used to flooding in the area but this is extraordinary," said police sergeant Edwin Graceley.

John and Merroli Haas, tourists from Kansas, took shelter from the heavy rain under the old market hall.

"We were going to go to Savannah (in neighboring Georgia) today but we decided not to. We didn't want to take the chance," Merroli said.

Power was out in parts of South Carolina and Haley reiterated her call for drivers to keep off the roads over the weekend for their own safety.

The National Weather Service warned of "potentially historic and life-threatening flooding" across the southeast of the United States.

"The threat for widespread, catastrophic flooding will continue across parts of the southeast through the remainder of the weekend, as tropical moisture feeding into an area of low pressure produces moderate to heavy rainfall across the region," it said.

"Gusty winds are also possible, which could lead to downed power lines."

In the Bahamas, a low-lying archipelago, homes were destroyed and residents left without power or phone services after Joaquin tore past.

"This is my 26th year living here and I have never seen this before," San Salvador resident Paul Turnquest told The Nassau Guardian.

"This is the worst I've ever seen."

The Bahamas' National Emergency Management Agency was working on damage assessment and reported maximum sustained winds of near 130 miles (210 kilometers) per hour.

Tribune242 quoted police as saying fatalities were possible but none had been confirmed.

Forecasters said Joaquin now is closing in on tiny Bermuda, with a population of just 66,000, where the potential damage could rival what was seen in the Bahamas.

In its latest bulletin, the US National Hurricane Center said Joaquin was closing on Bermuda.

The eye of the storm was expected near Bermuda on Sunday afternoon or early evening, it said.

Rescuers were still frantically searching for the El Faro cargo vessel, with which contact was lost early Thursday as the dangerous weather system approached the Bahamas.

So far, coastguard staff have turned up a life ring from the missing boat, but had no information about the boat's fate, according to company officials who said searching would continue Sunday.

En route from Florida to Puerto Rico, the 735-foot (224-meter) cargo ship was reported to be caught in the storm near Crooked Island, part of the Bahamas island chain.

It was from there that it sent a satellite notification stating the ship had lost propulsion and had a 15-degree list. Twenty-eight Americans and five Poles were on board, the Coast Guard said.