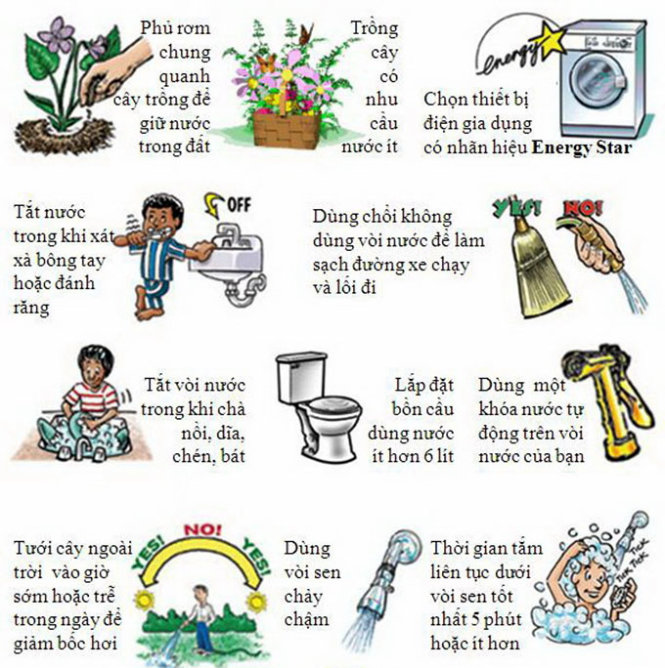 Each Vietnamese consumes 6,800 liters of water a day: study

A group of Vietnamese researchers trained abroad in water resource management have released a study indicating worrying statistics that each local consumes a daily average of 6,800 liters of water.

Their study raised an alarm on the fast-shrinking water resources regarding both quantity and quality the world over, particularly in countries in Africa, the Middle East, South Asia, and Southeast Asia.

Vietnam is no exception, the study pointed out.

The study cited the World Bank as saying that the world’s demand for water rises twofold after every 21 years.

The demand is expected to surge by 650 percent in 30 years’ time, when the world population is estimated at eight billion people.

That means roughly 250 million people in 26 countries would face a grave scarcity of water.

In Vietnam, around 41 million residents in rural areas currently have no access to clean water.

A mere eight percent of the rural population have running water at their homes; 82 percent can fetch water from improved sources outside their homes; while the remaining 10 percent still have to use water from unsafe sources. Though endowed with crisscrossing water sources and long coastlines, Vietnam is currently among the countries deficient in water as its average surface water per person each year is merely 3,840 cubic meters, compared to the International Water Resources Association’s average of 4,000 cubic meters, the study said.

It also pointed out that most water is used for agricultural production.

The agricultural sector used 93 billion cubic meters of water, or 81 percent of the total consumed in 2010.

The study highlighted that most of its respondents replied a person uses between 2.5 liters and 300 liters for human consumption, daily and production activities every day.

In actuality, the amount is considerably higher than those provided by the respondents.

The amount of water used directly and indirectly by an average person each day is a whopping 6,800 liters, or the volume of a small swimming pool, the study said.

The huge amount, termed “virtual water,” includes invisible parts, which are water used for the production of the industrial products and food people consume every day.

However, Vietnamese people’s awareness of the vital importance of water resources and frugal use remains limited, the study stressed.