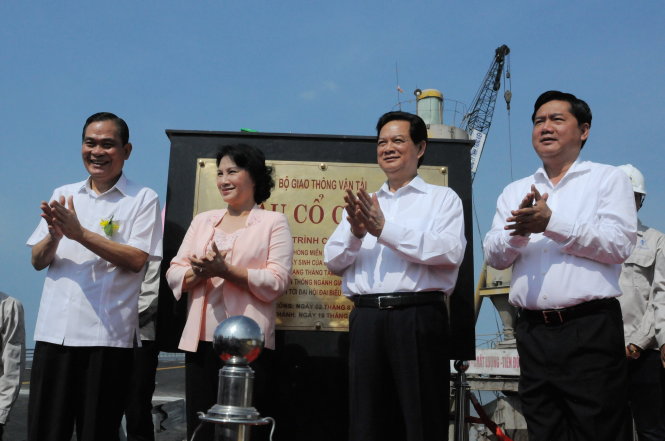 Vietnamese Prime Minister Nguyen Tan Dung on Saturday gave the order for a new bridge in the Mekong Delta to be opened to traffic, shortening the travel distance between a province in the region and Ho Chi Minh City and the amount of time it takes people to shuttle between the two places.

The Co Chien Bridge, spanning 1,600 meters over the Co Chien River, links the two Mekong Delta provinces of Ben Tre and Tra Vinh and helps people take shorter time to go from Tra Vinh to Ho Chi Minh City and the other way round, for they now no longer have to use ferries to cross the river.

The opening of the new bridge also shortens the travel distance between Tra Vinh and the city by 60 kilometers and has put an end to the operation of the Co Chien Ferry Station, situated about 3.6 kilometers upstream.

Construction of the VND2.3 trillion (US$106.2 million) bridge was completed in 21 months, 15 months ahead of schedule, said Nguyen Chung Khanh, general director of Project Management Unit No. 7, the supervisor of the bridge project, which was kicked off in 2013.

It is one of four major bridges on National Highway 60 and a vital link between the highway and other roads of the Southern Coastal Sub-Corridor connecting the four Mekong Delta provinces of Tien Giang, Ben Tre, Tra Vinh, and Soc Trang to other provinces and cities in the region and Ho Chi Minh City.

Speaking at the ceremony in Ben Tre, Prime Minister Dung said that the opening of the Co Chien Bridge has met the expectations of thousands of people living along the two banks of the river and opened up new opportunities for the socio-economic development of Ben Tre, Tra Vinh, and the entire Mekong Delta region.

The premier asked the Ministry of Transport to continue working with relevant local authorities to kick-start the Dai Ngai Bridge project linking Soc Trang and Tra Vinh soon so that it will be completed in about two years.

Once finished, the Dai Ngai Bridge will help reduce the travel distance from many coastal provinces of the Mekong Delta to Ho Chi Minh City by 70-100km.

A series of key transport projects in the Mekong Delta such as the Trung Luong – Can Tho Expressway; the upgrade of the Ho Chi Minh Road from Binh Phuoc Province to Tay Ninh Province, Dong Thap Province, Kien Giang Province, and Ca Mau Province; the N1 route from Tay Ninh to Ha Tien Town (Kien Giang); and the two big bridges Cao Lanh and Vam Cong will be completed during the 2016-20, PM Dung said.

The completion of those projects will create good prospects for the social-economic development of the whole region so local authorities should become more dynamic in reforming administrative procedures to attract investment and tap the existing potential, he added.