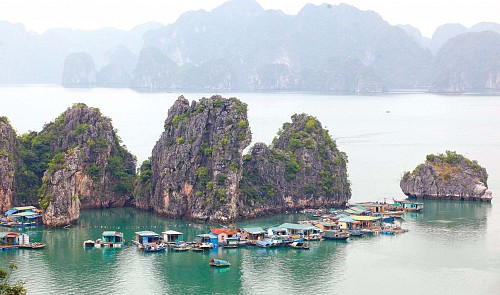 Ha Long Bay, a UNESCO World Heritage Site in northern Vietnam, remains uncontaminated in spite of coal, sludge and other waste swept away by floodwaters from nearby coal mines, the bay’s manager has confirmed. Pham Thuy Duong, head of the management board of Ha Long Bay, told Tuoi Tre (Youth) newspaper on Monday that the initial tests of water samples in the bay showed that there were no abnormal signs at the site, which is surrounded by thousands of hectares of coal mines and multiple coal-fired power plants. However, further testing should be conducted after the flooding ends to obtain conclusive results, Duong said. “So far, the sludge swept away by floodwaters caused by prolonged downpours from coal mining areas has yet to enter the bay. Professional agencies have inspected the bay’s surface and found it clear, and not contaminated with waste from canals that drain into the bay.” After the end of the torrential rains and subsequent flooding, which have raged in the northern region, including Quang Ninh, since July 26, the bay management board and relevant agencies will assess their impact on the bay’s environment, she added. Duong made these statements while international environmental activists are worried that the ongoing flooding in Quang Ninh may have serious environmental impacts on Ha Long Bay, according to national broadcaster Vietnam Television (VTV). Experts have warned that precautions should be made against possible pollution caused by coal, sludge, chemicals, fuels and waste that overflowed from coal mining areas into the environment during the flooding, VTV reported. Water sources can be contaminated with toxic substances such as arsenic and lead contained in coal sludge, the broadcaster said. In addition, burned coal can generate carbon monoxide and other gases that are of adverse influences on health, VTV cited scientists as saying.

The heavy rains have caused sludge from mines to spill into local communities, creating what activists call immediate and ongoing health and environmental hazards, according to Reuters. "We are deeply concerned by the pace of this unfolding disaster and its sheer scale," Reuters cited Robert Kennedy, president of Waterkeeper Alliance, an NGO that campaigns for clean drinking water, as saying. Heavy rains and subsequent flooding occurred in Quang Ninh on July 26 and spread across northern Vietnam, having so far killed 28 people, injured over 40 othersand left three missing, local authorities said on Monday. The downpours in Quang Ninh are considered the worst in the past 40 years, with rainfall totals of 1,500 millimeters in the past nine days, according to the National Center for Hydro-Meteorological Forecasting. As of yesterday, the province had suffered total damage of VND2.7 trillion (US$123.8 million), provincial authorities said, adding VND1.2 trillion ($55 million) of the amount was caused at coal plants under the Vietnam National Coal-Mineral Industries Holding Corporation Limited.