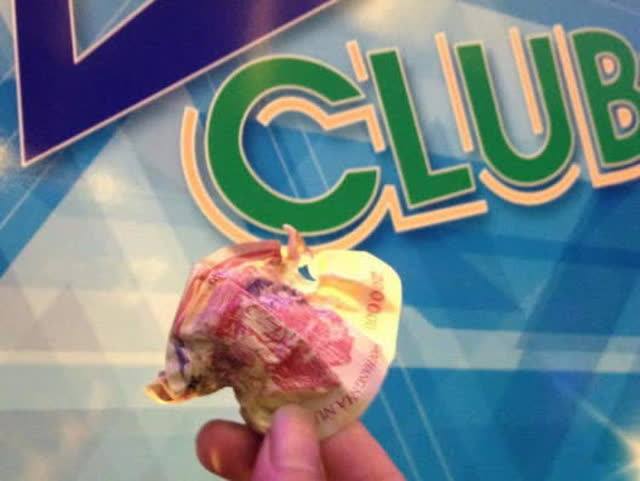 Tourism authorities in the central city of Da Nang have identified the Chinese club-goer who reportedly burned a Vietnamese banknote earlier this week, but it is unlikely the foreigner will be punished.

Photos surfaced on Facebook have suggested that a group of Chinese tourists, while throwing a party at the TV Club in Hai Chau District, set fire on a Vietnamese banknote and paid the bill in Chinese yuan.

The tourists are said to enter the bar on Wednesday night, with one of them burned a VND200,000 banknote, equal to US$8.93, at first light on Thursday.

Angered by such an improper act, the bar attendants immediately asked the Chinese to pay and leave. The foreigners then reportedly paid in their own currency, saying they had run out of Vietnamese dong.

The photos and the story of the Chinese tourists with such an unacceptable act have gone viral on Facebook, prompting local authorities to verify the issue.

Destroying the Vietnamese currency is a prohibited act as per the current law, and clearing payment in foreign currencies is also a law offense.

The Chinese tourists are seen in this photo posted on Facebook

On Saturday, the Da Nang tourism department said it had identified the Chinese man that directly set fire on the VND200,000 bill, as well as the involved Vietnamese tour agency who took the tourists to the bar.

Tran Chi Cuong, deputy director of the department, said police have known of the travel firm, tour organizer and tour guide of that group of Chinese tourists.

“We will work with those tourism personnel on Monday to verify the information,” Cuong told Tuoi Tre (Youth) newspaper.

The tourism department official admitted that the only way to resolve the issue is to verify testimonies of the eyewitnesses, who are the bar attendants, and the involved members of the travel firm because “the Chinese have all returned home.”

Cuong said the tour organizer must be responsible for the acts of the tourists they were in charge, adding the case had been transferred to Hai Chau police.