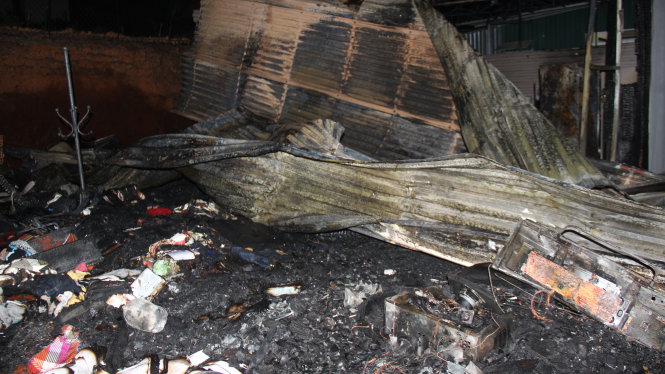 Tet has ended for a couple in the Central Highlands province of Lam Dong even before the holiday begins this weekend, when their house caught fire and killed both of their children on Thursday.

Le Ngoc Minh Quang and his wife Nguyen Thi Diem Tram were boiling banh chung, a rice-cake delicacy for the Vietnamese to celebrate Tet, on a stove in the kitchen, when they wanted to go out to do some stuff.

The parents decided to have their sons, aged six and five, stay behind locked doors and leave, not knowing that they would return to see the house on fire and their children trapped inside.

The kids were pronounced dead when people managed to break inside the burnt house, with rescue efforts hindered by the raging fire and strong wind.

The wooden house might have caught fire when strong wind swept through the stove, according to initial reports.

The fire even licked into the two next-door houses, but eventually caused no significant damages.

It took four apparatuses and 20 minutes to extinguish the fire.

Local authorities have started raising money to help the poor couple after the tragedy, when Tet was only two days away.