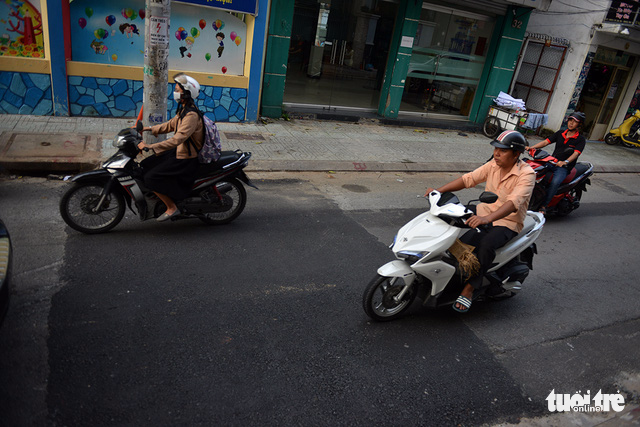 Several sections of road in District 1 have been dug up to facilitate the underground placement of electrical and telecommunication wires.

Upon placing the wires beneath the street, however, developers have refilled large sections of the roads in question with patches of asphalt, creating a dangerously uneven surface.

District 1 residents have reported hazardous conditions on Nguyen Phi Khanh, Thach Thi Thanh, Ly Van Phuc, and many others in the area.

Along some routes, sidewalks have also been damaged, creating an additional damger to pedestrians.

According to N.T.H.V., a vendor on Thach Thi Thanh Street, the road has become very dusty and difficult to travel on.

She added that she had even injured herself after tripping on the damaged sidewalk.

In addition, some of the construction has been also carried out during the day, despite regulations that roadwork be completed at night.

The situation has exacerbated congestion along several routes in the city.

According to an inspector from the municipal Department of Transport, roadwork developers that fail to restore the road to its original condition are subject to fines between VND1 million (US$43.9) and VND6 million ($263.5) per incident.

Those who commit multiple and repeated violations will be banned from carrying out construction work in the city for up to three years.

The official himself considered the penalty not stern enough, but explained that the transport department had proposed more serious punishments.