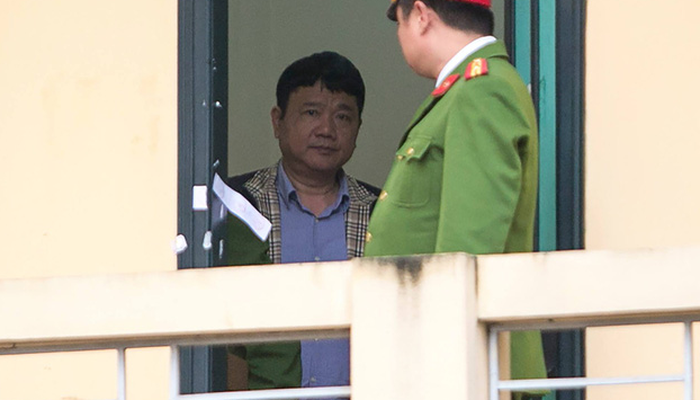 A former Politburo member and ex-chairman of state-run oil and gas group PetroVietnam (PVN) stands his second trial on Monday regarding his role in the loss of over US$35 million worth of PVN’s investment in a local lender.

The Hanoi People’s Court has begun the trial of Dinh La Thang, 58, and his accomplices who are accused of causing the heavy loss to PVN’s investment in OceanBank.

Thang was chairman of PVN’s management board for the 2008-11 tenure and previously a member of the Politburo, the all-powerful body of the Communist Party of Vietnam, from January 27, 2016 to May 7, 2017.

Quynh is additionally accused of abusing powers to appropriate property.

According to the indictment, Thang and his accessories set up a plan to establish a bank named Hong Viet, of which PVN would own 50 percent, in 2006.

In 2008, the prime minister did not approve the scheme, thus the defendants changed their plan to channeling PVN’s investment into OceanBank, which was considered to have poor performance at the time.

Thang did not discuss with the board when he signed a contract with Ha Van Tham, former chairman of the lender, after which the oil and gas group invested a total of VND800 billion ($35.2 million) in the bank.

He did not submit a report to the central government regarding the deal as promulgated by the law.

In 2015, the bank was acquired for zero dong by the State Bank of Vietnam, the country’s central bank, because of its poor financial results, which caused losses to the entire investment.

The trial is expected to last until March 29.

Thang has already been sentenced to 13 years in prison for deliberately violating state regulations following the court ruling on January 22.

He was involved in financial misconduct at PVN that resulted in losses of VND119 billion ($5.24 million).