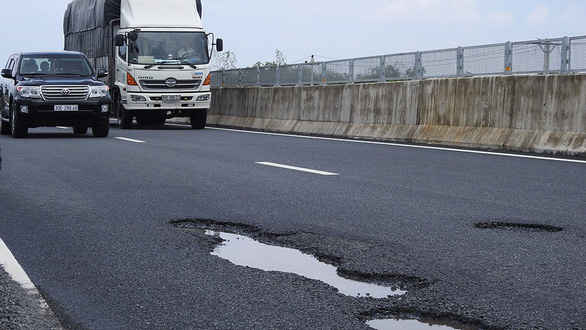 An expressway connecting Da Nang with neighboring Quang Ngai Province in central Vietnam has been suspended from collecting tolls until its developer properly repairs the numerous potholes riddling the road, the Ministry of Transport said in a dispatch on Thursday.

The dispatch is signed by Minister Nguyen Van The, who took action following drivers’ complaints that they have had to pay to drive on such a badly damaged expressway.

Potholes measuring up to one meter long, 33-40 centimeters wide and around ten centimeters deep have sprung up along multiple sections of the 139-kilometer expressway.

At a cost of more than VND34.5 trillion (US$1.48 billion), the four-lane expressway is designed for a maximum speed of 120 kilometers per hour.

However, drivers are often forced to slow down or even drive in the emergency stopping lane due to the potholes, which appeared soon after the expressway was opened to traffic on September 2.

Nguyen Tien Thanh, director of the management authority of the Da Nang – Quang Ngai Expressway, said rainwater combined with fuel leaked from diesel-engine vehicles have played a part in degrading the road surface so quickly.

Construction workers’ negligence during the asphalt laying process might have also added to the problem, he said.

At a government meeting on traffic safety on Thursday, Deputy Prime Minister Truong Hoa Binh said such reasons are not acceptable as all these factors should have been considered when designing the expressway.

“Roads don’t just break down due to high volume of traffic,” he said.

“That’s not an acceptable excuse, and [any violation] should be strictly dealt with.”

Transport Minister Nguyen Van The said he had assigned a delegation of officials to conduct a field inspection of the expressway on Thursday.

“Rain or overloaded vehicles cannot cause such damage,” The said.

“I think this has to do with the quality of construction and supervision of relevant authorities. The ministry has therefore taken firm action to suspend toll collection on the expressway and ask the investor to carry out repair works,” he added.

The suspension takes effect from 12:00 am on Friday, and will last until the road is properly resurfaced.

In its dispatch, the transport ministry also rapped leaders of Vietnam Expressway Corporation (VEC), developer of the Da Nang – Quang Ngai Expressway, for their lateness in addressing public concerns about the road’s poor quality, as well as for ducking responsibility in the issue.

Construction on the expressway, the first in central Vietnam, broke ground in May 2013, using loans from the Japan International Cooperation Agency, the World Bank and other domestic corresponding funds.

VEC is authorized to collect tolls from vehicles traveling on the expressway for 24 years starting 2018 under the build-operate-transfer (BOT) financing model, with fares ranging from VND180,000 ($8) to VND790,000 ($34) per vehicle.

An estimate of 28,000 vehicles commute on the expressway daily.