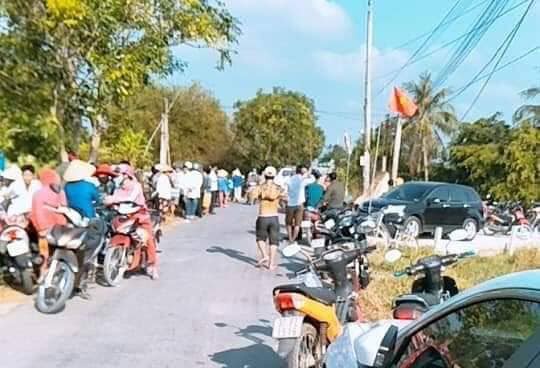 A woman from the southern Vietnamese province of Long An killed a robber on Monday after the latter broke into her home and fatally stabbed her husband.

The incident happened at the house of Nguyen Thuy Hang, 31, and her husband, 38-year-old Vo Tan Hoi, in Thuan Thanh Commune, Can Giuoc District at around 12:30 am.

The intruder was Nguyen Thanh Trung, who was the couple’s neighbor.

According to Hang’s statements, she was asleep when her husband went out of bed to check the back of the house.

The woman then heard a scream before discovering her husband’s body on the floor, while Trung was standing near him.

Hang then rushed to carry her year-old child to the front door, but the robber chased and attacked her with his knife.

She then managed to grab another knife on a nearby table and stabbed Trung in his head, killing him instantly, according to her account.

The woman then called for help and was taken to the hospital with two slash wounds in her back.

As the injuries were not serious, Hang was discharged on the same day to prepare for her husband’s funeral.

Senior Lieutenant Colonel Pham Thanh Tam, chief of police in Can Giuoc District, confirmed on Monday evening that officers had finished probing the scene and carrying out the autopsy.

“Hang has admitted to killing Trung,” the police official said.

“We will review the evidence to decide whether or not her action was self-defense.”

According to Hoi’s relatives, the victim previously loaned VND60 million (US$2,580) to Trung, with the borrower required to pay monthly interest.