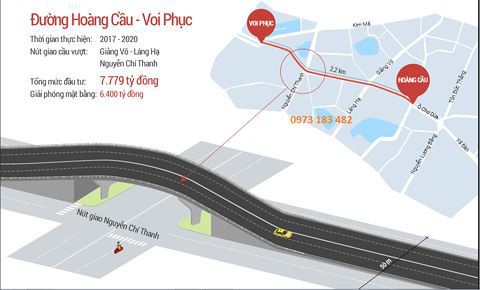 Construction of Vietnam’s ‘costliest road’ to begin later this year

The construction of a road worth VND7.8 trillion (US$335 million) in Hanoi, which was dubbed the ‘planet’s costliest,’ is expected to begin in the third quarter of this year.

The announcement was made by Le Van Binh, deputy director of the city’s management board for construction and industrial works, during a press meeting on Tuesday.

The road, named Hoang Cau-Voi Phuc, is a section of Ring Road No.1, Binh stated, adding that the project was approved by the municipal People’s Committee in October 2018.

The street will be 2.2 kilometers long and 50 meters wide, which plays a significant role in boosting traffic connectivity and alleviating congestion in the capital.

It will include two overpasses at the Giang Vo-Lang Ha and De La Thanh-Nguyen Chi Thanh intersections upon completion.

The project will encompass an area of nearly 160,000 square meters, of which over half currently belongs to local residents.

This means that to execute the plan, a total of 2,044 households will have to be displaced.

Investment is estimated at VND7.8 trillion, of which over VND6.4 trillion ($275 million) will be used for site clearance and the resettlement of affected residents.

As it costs VND3.54 billion ($150,800) per meter, Hoang Cau-Voi Phuc has earned its nickname as the ‘planet’s most expensive road’ since its estimated construction cost was made public in 2018.

The site clearance process has been carried out since the first quarter, Binh said.

The developer has been facing challenges as a number of affected residents did not agree to relocate, the official elaborated.

Efforts are being exerted for the process to complete in the soonest time possible, allowing the construction to start in the third quarter, he added.