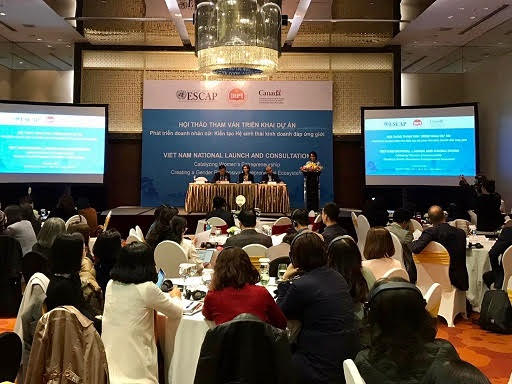 A project to support the growth of women entrepreneurs in Vietnam was launched this week by a United Nations agency.

The Catalyzing Women’s Entrepreneurship (CWE) project was launched by the United Nations Economic and Social Commission for Asia and the Pacific (ESCAP) in collaboration with Global Affairs Canada and the Ministry of Planning and Investment of Vietnam.

It aims to support women’s entrepreneurship as a strategy for poverty reduction, social well-being, and sustainable economic growth.

The CWE project will address the complex barriers faced by women entrepreneurs by working with a range of stakeholders including ministries and the private sector partners in Vietnam.

Together with these stakeholders, the project will focus on policy and advocacy, innovative financing, ICT, and business skills.

Despite Vietnam’s recent progress regarding its socio-economic status, women are estimated to own only 21 percent of formal enterprises and face various barriers to entrepreneurship, the UN agency said.

Such barriers include, amongst others, limited access to finance and information and communications technology (ICT) infrastructure, lack of financial and business knowledge, and discriminatory social norms.

“Women entrepreneurs are true agents of change whose innovations can lift companies, communities, and countries,” she said, adding that governments, the UN, and the private sector are joining forces in this area to improve women’s and girls’ prospects in the region.

“With greater equitable access to resources and an improved favorable gender-responsive business climate, they could further overcome the conscious and unconscious biases and constraints that limit their potential,” he said.

“Then they could grow stronger and contribute to more inclusive and sustainable growth in Vietnam.”

Ambassador of Canada to Vietnam Deborah Paul said her country has helped improve women's participation in economic decision-making and supports female entrepreneurs to grow their businesses in Vietnam.

“Canada's partnership with ESCAP will contribute to economic inclusion and advance opportunities for women-led start-ups and female entrepreneurship in Vietnam and other countries across the Asia Pacific,” Ambassador Paul said.

The CWE project will be implemented across six countries in Asia and the Pacific, including Bangladesh, Cambodia, Fiji, Nepal, Samoa, and Vietnam.

The program hopes to impact 20,000 women entrepreneurs directly and 500,000 people indirectly while also engaging with 50 policymakers and regulators to enable six policies to support women entrepreneurs and introduce ten financing solutions to the market by 2023.