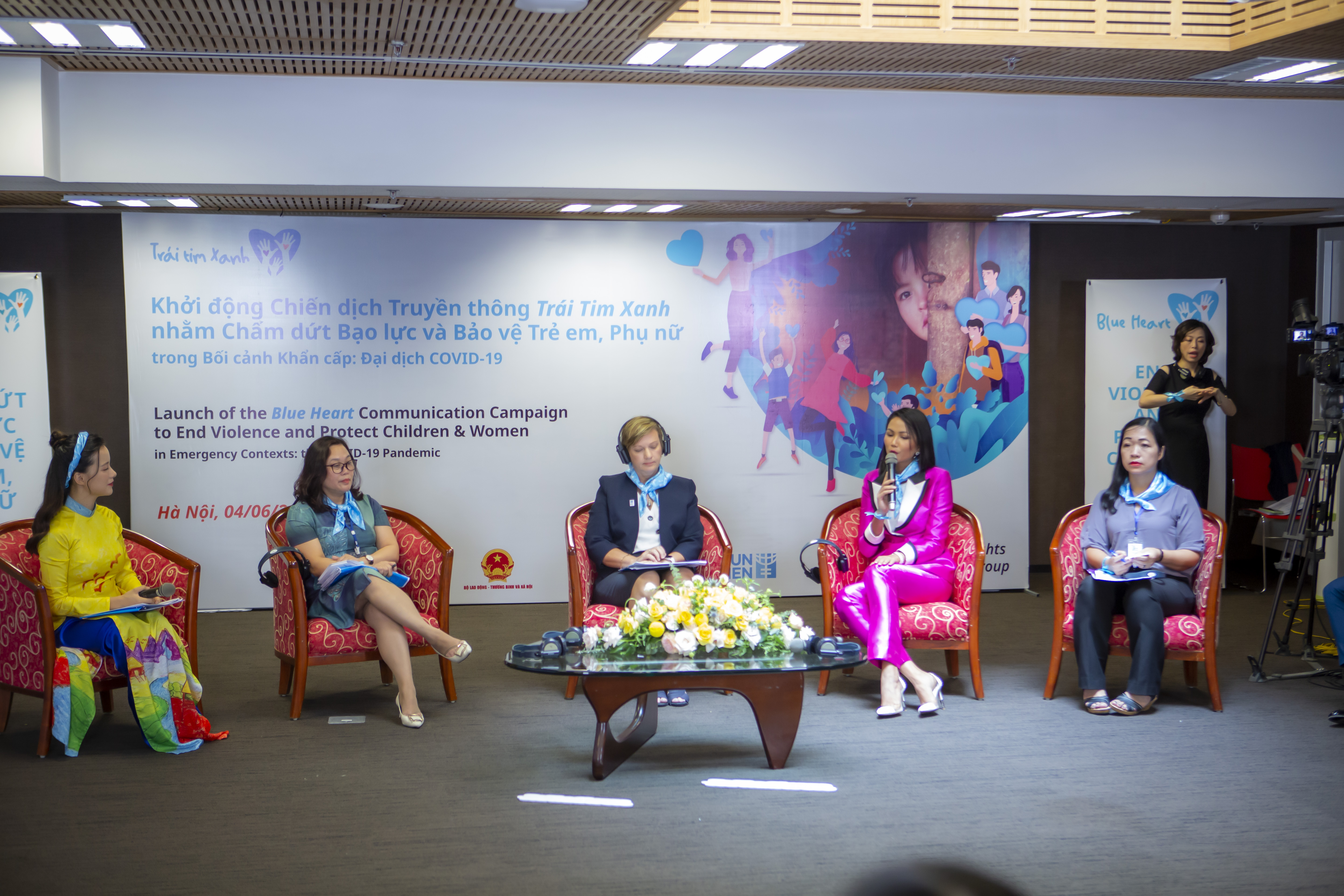 Violence against women and children is never acceptable is the message promoted by UN agencies, the government of Vietnam, and other partners when they launched a campaign to raise public awareness of the risks of violence against children and women, including in emergency situations such as the COVID-19 pandemic, in Hanoi on Thursday.

The partners voiced their call for action to protect all victims.

The campaign, called Blue Heart, is the latest effort by the Vietnamese Ministry of Labor, War Invalids, and Social Affairs (MOLISA) and its long-term partners UNICEF, UNFPA, and UN Women, along with international non-governmental organizations including Save the Children, Plan International, World Vision, ChildFund, and others.

The campaign calls for action from the public, parents/caregivers/family members, women, men, girls, boys, neighbors, teachers as well as local authorities to speak up against and report violence.

It also provides knowledge and skills to women and children to prevent violence and abuse, and improve the mental heath and psychosocial well-being of all those affected.

The COVID-19 pandemic has had a significant impact across the world.

While efforts to contain the virus were crucial in keeping the population healthy, they also exposed women and children to increased risks of violence, including maltreatment, gender-based violence, and sexual abuse.

Recent reports from countries in COVID-19 emergency have shown that movement restrictions, social distancing, and other containment measures coupled with existing or increased social and economic pressures on families contribute to a surge in violence, particularly against women and children.

In many countries around the globem, domestic violence has risen at least 30 percent.

In Vietnam, the Peace House, a shelter for women and girl victims of domestic violence and abuse under the Vietnam Women’s Union, has reported receiving twice as many women seeking shelter during the COVID-19 epidemic.

Children and women are both the victims of, and witnesses to, domestic violence which scars them physically as well as psychologically.

“UNICEF, UNFPA, and UN WOMEN join their hands in asking all citizens to report abuse and to help hold the perpetrators accountable,” said Rana Flowers, UNICEF representative, speaking on behalf of the participating UN agencies.

“Violence occurs in rich and poor families and communities, in educated and less educated households.

“It is always about power over the victim and it is never acceptable.

“In uncertain times and periods of stress and anxiety, sadly the already high numbers worsen.

“Women are frightened to report and children rarely in a position to report such abject acts.

“We urge the local authorities, communities, parents, and the government to act to ensure the protection and safety of women and children”.

Elisa Fernandez Saenz, UN Women representaive in Vietnam, said, “No matter where violence happens, in what form, and whom it impacts, it must be stopped. Strengthening services to respond effectively to violence against women and children during and after crisis, including COVID-19, will enhance the preparedness and response strategy of Vietnam.”

Children’s reliance on online plat­forms for distance learning has also increased their risk of exposure to inappropriate content and online predators.

“The government of Vietnam has paid attention to the negative impact of the COVID-19 pandemic on the people and it has implemented emergency social protection measures to support those who are affected,” stated Dang Hoa Nam, director of the Children’s Affairs Department at MOLISA.

Many activities were conducted to protect children and to prevent violence, sexual abuse, online abuse, and child injury during social distancing periods when they stayed home or in quarantine centers, Nam said.

Vietnam has received great support from UNICEF and other internatonal organizations working for children while learning valuable lessons on how to better protect children and women in emergency situations, he added.

“From many conversations that members of Vietnam’s Child Rights Working Group (CRWG) have had with children, we know that ending violence, abuse, and physical and humiliating punishment is among children’s top priorities, especially so in the situation of COVID-19 anxieties,” said Dragana Strinic, country director of Save the Children.

“We in the CRWG are committed to working with the Government of Vietnam, with parents and communities, and all the other partners and stakeholders to ensure all children can live in a safe and friendly environment, and develop to their full potential.”

The Blue Heart campaign is part of the Month of Action for Children, which is celebrated in Vietnam in June every year.

The campaign also features a title song, Under the Same Sky performed by Vietnamese singer Trong Hieu and a series of international artists to promote love, protection and equality.

The song, written and composed by the singer himself during his ‘stay-at-home’ COVID-19 period was released on Thursday.