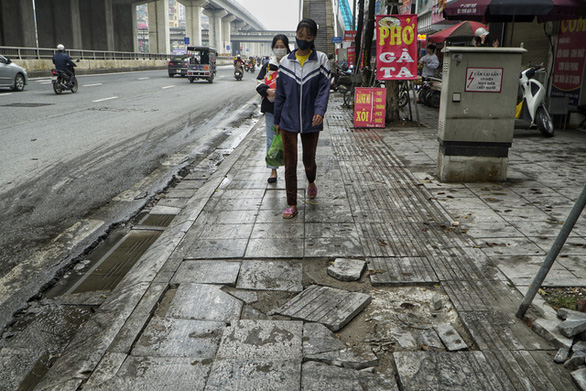 Claimed to last for at least 50-70 years, stones used to pave major streets in Hanoi are falling apart only a few years after they were installed.

Three years ago, Hanoi’s authorities introduced a new set of regulations on road renovation, which slated a complete transition of paving material from bricks to natural stone on 900 streets of the capital city for the end of 2020.

In the process, natural stone was praised as a sturdy paving material which can last for at least 70 years.

However, as observed by Tuoi Tre (Youth) newspaper, stones used to pave major streets in Hanoi, including Nguyen Trai, Khuat Duy Tien, and Tran Duy Hung, are extremely dilapidated, with tiles broken apart, despite being installed just a few years ago.

On Nguyen Trai Street in Thanh Xuan District, several sidewalk ramps built from the third quarter of 2017 were already ruined.

Nguyen Thanh Tu, a student of the University of Science on Nguyen Trai Street, said paving on the street lost its original visual appeal as stone tiles were gradually shattered.

“Students like us were very happy when the paving was first completed as it was clean, which helped us walk to school without facing dirt splashes on shoes and clothing. However, it only lasted for over a year as the tiles have cracked, allowing rainwater to store underneath the paving,” Tu said.

On Khuat Duy Tien Street in Thanh Xuan District, tiles of the newly-installed paving were displaced, revealing the concrete layer underneath.

According to Dao Ngoc Nghiem, vice-president of the Vietnam Urban Planning and Development Association, the responsibility of administrative authorities, particularly Hanoi’s Department of Construction, needs to be addressed in this case.

“Hanoi’s Department of Construction is the main agency in charge and administrative body [of the project], which is why they should take responsibility for the monitoring and implementation process of the stone paving,” Nghiem stated.

Construction suppliers should also be held accountable for the stone quality, Nghiem added.