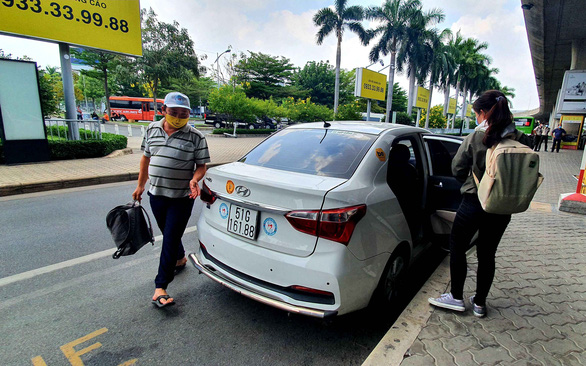 Vehicles working with the Vietnamese ridesharing solution 'be' will be allowed to use a dedicated lane to pick up customers from Tan Son Nhat Airport in Ho Chi Minh City, a favorable outcome for the firm after the airport banned all ride-sharing vehicles from its passenger pick-up lane back in November 2020.

Passengers of be, who once had to go to uncomfortable lengths to embark their ride, can now be picked up in Lane B at the international terminal, which is located right next to the domestic arrival hall.

The dedicated lane for be vehicles, which was specified as the section from pillar No. 7 to No. 11 in Lane B at the international terminal, was launched on Monday.

It is considered the fruit from a long negotiation between the ride-hailing app and the airport, after the ban caused major inconvenience to the customers.

As per the rule introduced on November 14, 2020, only specified types of cars are allowed to use the four internal lanes in front of the domestic terminal.

Lane A, which is closest to the terminal, is restricted for vehicles dropping off departing passengers.

Lane B and Lane C are reserved for private vehicles picking up passengers after they land, while Lane D, located within the TCP parking structure, is now for taxis.

App-based cars must go to the 3rd, 4th or 5th floors of the parking garage to pick up customers at Tan Son Nhat, which means their customers must cross the internal car lanes and climb up the stairs or wait for the crammed elevators to reach the rides.

On Monday, be users were instructed by the app to go to the international terminal after leaving the arrival hall, but no physical guiding signs were seen around, which made it hard for customers to pinpoint the correct location.

After disembarking a Vietjet flight from central Da Nang City, Hung, a be customer, found it confusing to find his booked vehicle at Tan Son Nhat, as he had to ask the security staff to find the right way.

However, Hung was still relieved that he did not have to wait for the overcrowded elevator to climb the parking garage as before.

“[With be,] I get informed about the ride fare, which helps me make better choices instead of having to wait for the taxi meter,” Hung stated.

Meanwhile, customers of other apps, including the Singapore-based solution Grab, still have to head to the parking garage for their rides, despite paying the same entrance fee of VND25,000 (around US$1) as be customers.

According to a be representative, the VND25,000 fee for each ride includes VND15,000 for the pick-up location, while the remaining VND10,000 is for the entrance fee at the airport gate, an approach seen as double charging by many customers.

The representative also affirmed that be is the only ride-hailing service provider to be granted an internal lane at the moment.

The ride-hail firm is also petitioning for its rights to use Lane E, a new lane in front of the domestic terminal with a putative launch date in April.

Meanwhile, Grab has not seen any success in its negotiation with Tan Son Nhat operators so far, which means its vehicles still have to use the upper floors of the parking garage to pick up riders.