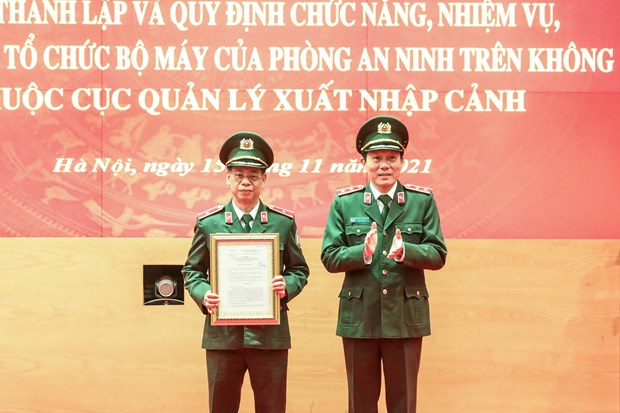 Vietnam’s Ministry of Public Security has established an air security force in charge of combating terrorism and ensuring security on flights operated by local airlines, the Vietnam News Agency reported.

A ceremony was held in Hanoi on Monday morning to launch the air security unit, which is under the management of the Vietnam Immigration Department.

The force is tasked with preventing and combating terrorism, preventing and handling unlawful interference, and ensuring security on flights of Vietnamese airlines.

Officers will monitor situations related to aviation security, as well as collecting and analyzing information to predict the conspiracy, methods, and schemes that threaten the security and safety of domestic and international flights.

The unit will also submit proposals to the Immigration Department regarding plans to proactively detect, prevent, and handle acts of terrorism or threats against aviation safety and security.

In addition, officers will be responsible for coordinating with cabin crews in dealing with unlawful interference and unexpected situations that compromise security and safety onboard aircraft.

They are allowed to use weapons, tools, and technical means in accordance with the law to neutralize these illegal acts.

In special cases, the unit will propose the postponement of a flight if having enough grounds to identify potential terrorist or illegal activities.

Vietnam has not recorded any evidence of the intention to carry out illegal acts by terrorist organizations, according to the Ministry of Public Security.

However, Southeast Asia, with more than 300 million Muslims, is emerging as a source of manpower for radical Islamic terrorist organizations.

Representative agencies of the U.S. and other countries participating in the U.S. anti-terrorist coalition are at risk of becoming the target of possible terrorist attacks.

Therefore, the Immigration Department decided to work with relevant agencies to prepare for the organization and operation of the air security force in early 2020.

Given approval from the Ministry of Public Security, relevant units have been recruiting and training officers for this special force.