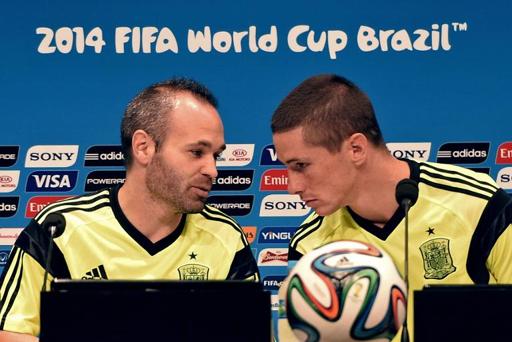 Defending champions Spain could be knocked out of the World Cup Wednesday if they crash and burn against Chile at the Maracana stadium, the spiritual home of the Brazilian game.

Humiliated 5-1 by the Netherlands in their opening Group B game, the 2010 winners and two-time European champions, will be doomed if they lose to Chile and the Dutch avoid defeat to Australia earlier in the day in Porto Alegre.

Only three defending champions have previously fallen at the first hurdle -- Brazil in 1966, France in 2002, and Italy in 2010 -- and midfield star Andres Iniesta knows that Spain face a challenge to survive.

"Chile are a difficult team because we'll have to defend and we'll have to fight one against one," said the Barcelona midfielder, scorer of the decisive extra-time goal against Holland in the 2010 final.

"We must be able to make the right passes, and look for those in space, so we can score goals.

"Our only goal right now is winning so we can go to the next phase. But we trust ourselves and we're well equipped for that."

Chile won 3-1 against Australia in their first game and coach Jorge Sampaoli has admitted that Spain's capitulation to the Dutch will influence his side's approach to the game.

"We had already developed a system before the World Cup and we already knew how we'd play against Spain," said the Argentine, whose side have lost only twice in their last 16 games.

He cautioned: "Don't forget they lost against Switzerland in their opening game at the last World Cup, but still became champions."

Sampaoli will wait until just before kick-off before deciding whether to hand a start to Juventus midfielder Arturo Vidal, who is recovering from knee surgery and managed only 60 minutes against Australia.

Spain coach Vicente del Bosque has hinted that he will make changes to his starting XI, with Pedro Rodriguez, Cesc Fabregas, Juan Mata and Fernando Torres all in contention to come into the team.

Captain and goalkeeper Iker Casillas, who endured a catastrophic display against Holland, could find his place under threat.

Australia manager Ange Postecoglou thinks attack will be the best form of defence for his side as they face in-form Dutchmen Robin Van Persie and Arjen Robben, who both struck twice against Spain.

"We know we have to be strong defensively, the Dutch are dangerous going forward as they showed against Spain," he said.

"We know that Van Persie and Robben will be a challenge, but we knew that coming into the tournament. In saying that we also need to be attack-minded, we can't just defend for 90 minutes."

Netherlands coach Louis van Gaal has told his players to keep their feet on the ground after the euphoria of avenging their defeat to Spain in the 2010 final.

"You win the World Cup by winning the final," said the Manchester United manager.

Dutch concerns over the fitness of centre back Ron Vlaar were eased by Van Gaal as he insisted he has a fully-fit squad to choose from.

However, Postecoglou will be forced into at least one change due to an injury suffered by Ivan Franjic, with former Heart of Midlothian defender Ryan McGowan set to deputise.

In Group A, Cameroon and Croatia, beaten by Mexico and Brazil respectively in their openers, meet in Manaus where defeat for either side will mean the end of their last-16 hopes.

Croatia are still bitter after they lost to Brazil in their opening game which saw them have a goal controversially disallowed while the hosts won a dubious penalty.

Meanwhile, Mexico goalkeeper Guillermo Ochoa was basking in the plaudits after a string of fine saves ensured a 0-0 draw against Brazil on Tuesday.

"It was the best game of my life," said Ochoa, 28, after he produced several stunning stops to frustrate Brazil at Fortaleza.

One stop in the first half, down low to his right to keep out Neymar's header, had shades of a legendary save by England's Gordon Banks to deny Pele in the 1970 World Cup in Mexico.