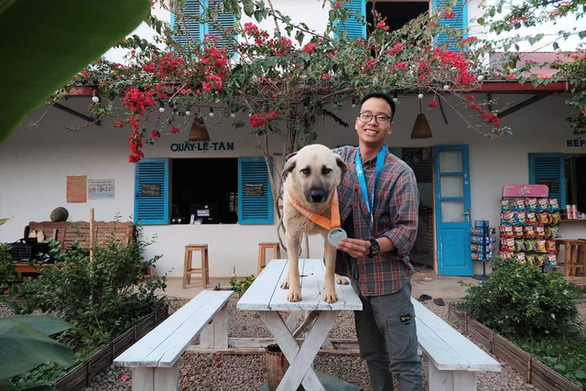 A two-year-old dog has been the talk of Vietnam’s online community this week after completing a 42-kilometer run at a trail marathon in the northern region of the country last weekend.

The race attracted more than 3,000 runners from 42 countries and territories who competed in ten-kilometer, 21-kilometer, 42-kilometer, and 70-kilometer distances.

Among the participants was a four-legged runner, Cam.

Cam is a dog raised by Le Hong Thai, the owner of the Mama's House hostel located near Ban Ang pine forest – the starting point of the 21km, 42km, and 70km runs, according to the race's organizer.

According to some runners, the dog started running alongside the marathoners of the 70km event to the first checkpoint, then decided to return to the start and joined the 42km pack.

The dog was then brought back home by Thai at 6:00 pm after the owner had learned about his "participation" in the race through a post on the event’s official Facebook page.

“Cam looked tired after the race but he was quickly back on his feet on the next day as if he had never joined the tough run,” Thai said.

The owner added that he plans to register Cam for next year’s VTM.

Cam’s run has become an Internet sensation and impressed Vietnam’s running community throughout the week.

He has since been given the nickname ‘the VTM Wonder Dog.’

Many runners suggested the organizing board of the VTM 2020 award the dog with a medal for finishing the 42km run.

As words spread, Topas Travel announced on Friday that Cam had been presented with a medal as a finisher of the 42km category, making him arguably the first dog to get such an honor.