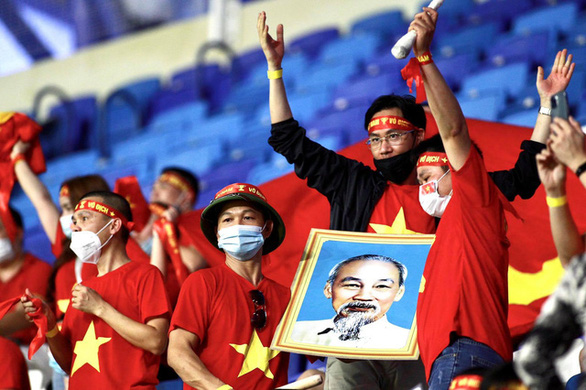 The Hanoi People’s Committee has announced that it will allow spectators to enjoy Vietnam’s matches against Japan and Saudi Arabia at My Dinh National Stadium in the final round of the 2022 FIFA World Cup Asian qualifiers in November.

Chu Xuan Dung, deputy chairman of the committee, signed and sent the approval to the Ministry of Culture, Sports, and Tourism on Thursday afternoon.

Dung allowed related units to sell tickets at 30 percent of My Dinh’s 40,000 seating capacity so that a maximum of 12,000 fans can lively support Vietnam in each of their games against Japan on November 11 and Saudi Arabia on November 16.

Spectators must have received the second dose of COVID-19 vaccine for at least 14 days or have recovered from COVID-19 no more than six months prior, have a negative test result issued no more than 72 hours before the game, and strictly comply with social distancing recommendations at the stadium.

The deputy chairman requested the Vietnam Football Federation (VFF) ensure security and safety for the participating teams and officials attending the matches.

In addition, the VFF must designate a hospital in advance to handle possible cases of injury, illness, or COVID-19 infection.

The sports ministry and the VFF had sought permission for the two qualifying games to take place with spectators' attendance as Hanoi had escaped the brunt of a fierce wave of coronavirus infections which have rocked Vietnam since late April, with the capital city recording just 4,374 of the country’s 872,811 community transmissions.

The city’s new cases have been on the decline and the majority of its adult population have been at least partially vaccinated.

After a leader of the Hanoi Department of Culture and Sports said from the capital administration’s point of view, those two matches would take place behind closed doors, the VFF reported the issue to the prime minister via the sports ministry, leading to the U-turn.

While enjoying Hanoi authorities’ approval for spectators to attend the World Cup qualifying matches, certain Vietnamese football fans were likely dismayed to hear that the Golden Stars slipped from 95th to 98th in the October update of the FIFA rankings on Thursday afternoon.

The demotion also saw Vietnam slide from 15th to 17th in the Asia rankings.

This is the first time in two years, from October 2019 to September 2021, that the Vietnamese have not placed in the top 15 of the continental football table.

This was foreseen as Vietnam lost all their first four games in the final round of the 2022 FIFA World Cup Asian qualifiers, most recently 1-3 to Oman, and are at the bottom of Group B with zero points.

If Vietnam are defeated by Japan and Saudi Arabia next month, they will definitely be knocked out of the top 100 in the FIFA rankings.

The squad will resume training on October 25 as per their schedule.