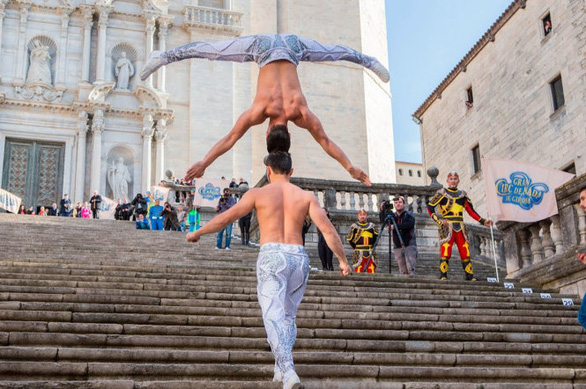 Ho Chi Minh City-based acrobat duo Giang Brothers have announced that they are returning to Spain in December to break their own world record – climbing 90 stairs in 52 seconds while doing a head-to-head balancing act, a career-making feat they achieved in 2016.

The gymnasts received the invitation to Spain two weeks ago, Giang Quoc Co, half of the duo, told Tuoi Tre (Youth) newspaper.

Co and his brother Giang Quoc Nghiep were hesitant at first as their training have been hindered by COVID-19 over the past months, while the epidemic situation in Spain is still unpredictable.

“However, this is a rare opportunity that should not be missed, so we decided to resume our training before flying to Spain in December,” Co stated.

According to online news site VnExpress, the invitation was sent out from Spain-based Circus Arts Foundation.

In its letter to the Ho Chi Minh City Department of Culture and Sports and Phuong Nam Theater Troupe, the Giang Brothers’ employer, the foundation stated that they wanted to see the Vietnamese duo break their own world record at the staircase leading to the Cathedral of Girona in Spain on December 23.

Speaking of the challenge, Co said he and his brother are practicing to be able to keep their balancing act while climbing the 100-step staircase of the Cathedral of Girona in less than one minute.

Co and Nghiep became internationally famous after earning a spot amongst Britain’s Got Talent finalists in June 2018.

Prior to their appearance on the show, the pair earned fame in 2016 for breaking a Guinness World Record when they scaled 90 steps to the Cathedral of Girona in just 52 seconds, with one sibling balanced atop the other using only head-to-head contact.

In 2018, they set a new Guinness World Record for 'climbing and descending ten stairs backward while being blindfolded and balancing head-to-head' during a performance filmed in Italy.