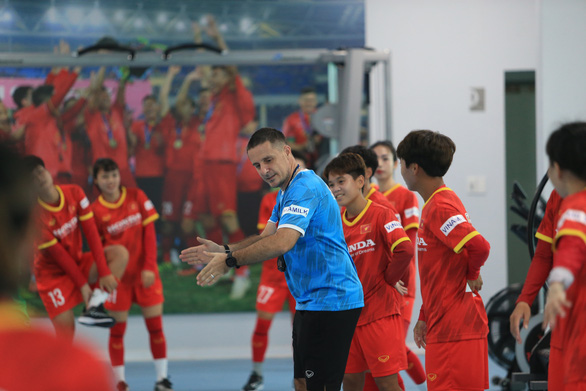 The Vietnamese national women’s football team will head for Spain next month to prepare for the 2022 AFC Women’s Asian Cup in India, head coach Mai Duc Chung told the press on Monday.

The team will depart on December 26 and have three friendly matches in Spain before attending the Women’s Asian Cup, which is scheduled to take place in India from January 20 to February 6.

The Vietnamese women resumed their centralized training, which is expected to last until their departure for Spain, with 28 members on Sunday.

In his remarks on Monday, coach Mai Duc Chung said that he was impressed with his team’s performance in their five games at the 2021 National Women’s Football Championship.

Some of the best performers in the tourney have been called up to the national team, including midfielder Tran Thi Hai Linh and such experienced players as Nguyen Thi Thu, Nguyen Thi Lieu, and Pham Thi Tuoi.

The AFC Women’s Asian Cup is a quadrennial competition in women’s football for national teams which belong to the Asian Football Confederation (AFC).

Vietnam are placed in Group C of the 2022 AFC Women’s Asian Cup, alongside Japan, South Korea, and Myanmar.

Group A includes India, mainland China, Taiwan, and Iran while Group B includes Thailand, the Philippines, Australia, and Indonesia.

After the group stage, the top eight squads will advance to the quarterfinals.

The tourney will also serve as the final stage of the Asian qualification for the 2023 FIFA Women’s World Cup, with the top five teams advancing directly while two more will book places in the inter-confederation play-offs.

A World Cup spot is the challenging target coach Chung has set for his players as they will compete in a considerably tough group with strong opponents like Japan and South Korea.