A home for the homeless in Da Nang

In Da Nang, there's a house of hope for the homeless

'House of Hope' shelters dozens of homeless people for free 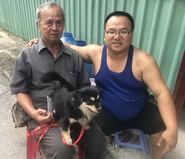 ‘I can’t abandon him’

The story of a young man, who extended his hand and opened his heart to a homeless woman with a young son, has received thousands of comments and shares on social media after a photo was taken of them and posted last month by the creator of the hugely popular “Humans of New York” (HONY) photo blog