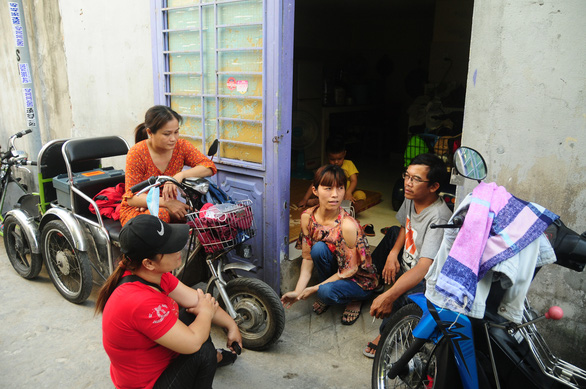 In Da Nang, there's a house of hope for the homeless

Located inside a small alley on Pham Nhu Xuong Street in Da Nang is a special communal house that shelters dozens of homeless people for free.

They call it the 'House of Hope' because, besides a place to rest and recharge, the house grants them compassion and reason to live on.

Tran Thi Manh, a poor mother from the central Vietnamese province of Quang Tri, has just been admitted to the House of Hope.

Wearing a knitted hat on a hot summer day, Manh looks around to find belongings in the new room.

After her husband’s death in wartime in 1972, she took her two daughters through downpours of bombs to the south, in search of a livelihood.

As her daughters are married and barely able to support their mother, she moved to Da Nang in the central region of Vietnam to live the rest of her life.

Landfills and abandoned houses become Manh’s shelters while collecting scrap metal was her only means of earning a living.

At the time, Manh was lying under a plastic sheet hanging beside an abandoned house, crouching as a cold wind blew.

That image haunted the young men, urging them to think of practical solutions for helping the vulnerable instead of just granting gifts.

One of them thought that they could rent a safe, cozy communal house to host homeless people.

At the end of March, they wandered around the city, looking for a place that met all criteria before standing in front of a house in a small alley on Pham Nhu Xuong Street.

After hearing their story and plan, the homeowner decided to lease them his estate to welcome the down-and-out.

On April 18, a large board engraved with 'House of Hope' was hung up.

For the first month, Anh and his friends rushed to collect tenants’ personal documents to register with local police.

The kind landlord used his own money to renovate the house, buy more fans, and set up a gas stove.

“We don’t want tenants to feel that they are unwanted," said Anh.

"It is simply a gift from the people of Da Nang City and they are welcomed as a part of the city."

Da Nang has long been considered as one of Vietnam’s most liveable places.

However, according to the house’s tenants, there is room for improvement as not every vagrant can access free shelters.

The house has just welcomed its newest members, the family of 40-year-old Nguyen Thi Hanh and 36-year-old Duong Tan Thanh who were found near the local Khanh Son landfill.

Anh and his friends had been stopped by two abnormal-looking children in soiled clothes running from a temple.

They followed the children and found their parents – Hanh and Thanh.

Speaking to the strangers, Thanh struggled to tell his own story. Thanh’s older child, aged seven, could not control his behaviors.

The whole family were later offered a stay at the House of Hope.

Besides Thanh and Hanh, the house, though simply furnished, has brought 'miracles' to some other special couples.

A limbless couple who work as street vendors also call the house their new home.

According to Anh, the communal house has six rooms of 15 square meters each.

The monthly rental price for one room is VND1.5 million (US$65) yet the landlord subsidizes it and receives only VND8 million ($348) for the whole building.

It is fully occupied and the group pre-paid three months of rental. The contract is one year at least.

To sustain the project, And and his friends spend their own pocket money and call for funding from communities.