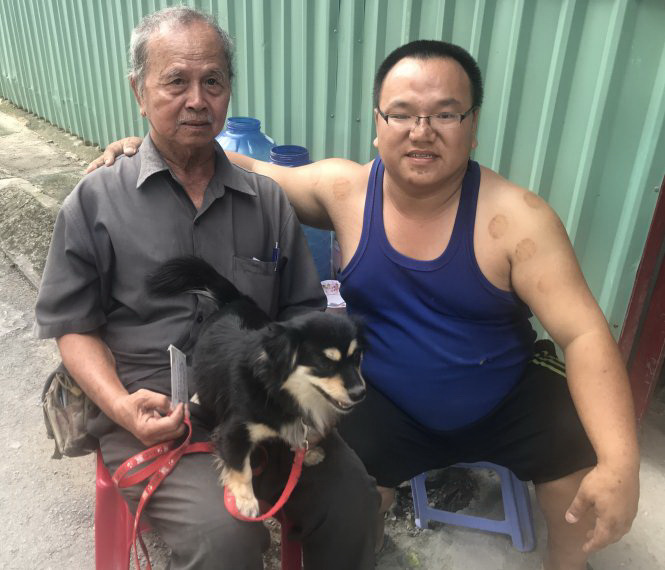 A parentless parking lot attendant in Ho Chi Minh City has shown human kindness by letting a down-and-out elderly man to live with him for over a year, even though their ‘home’ is the same parking space where he works every day.

On a late August day, 72-year-old Nguyen Van Nen walked with a pronounced limp back to his so-called house at the parking lot of an apartment building in the southern metropolis’ Binh Thanh District.

Nguyen Do Duy Linh, the attendant here, moved a chair so that Nen would sit on it.

The two men’s fates have been tied together after many encounters.

After Linh’s parents died when he was young, he was brought up by a relative until turning 18, when he began making money to fend for himself.

Linh used to give food to Nen, who was usually seen sleeping on sidewalks together with a stray puppy named Coca.

When Linh had become a parking lot attendant of the apartment building more than a year ago, he saw Nen again, but this time the old man was being shooed away by one of the high-rise’s security guards.

Linh suggested that Nen live with him at a space in the parking lot since a life of homelessness would worsen old age.

“You’ll eat what I eat,” Linh recalled saying to the senior, whose papers consisted of an identity card and a body donation one.

Linh has since fed and tended Nen, with the latter sometimes keeping a close watch on the coming and going of vehicles when the 35-year-old is taking a nap.

The middle-income man did not seem to regard Nen as a burden.

“I’m young and single, so I don’t use much money. I think of the old man as my father,” Linh said.

“As I grew up in hardship and have no parents, working harder due to the old man isn’t a problem to me.”

Nen, who had lived as a tramp for 29 years in Ho Chi Minh City before meeting Linh, promised to donate his body to science to have all funeral costs covered.

“When I die, just call the number on the card and workers will take my remains. So you don’t need to worry,” Nen told Linh.

Linh said he did not entertain the plan of getting married but if he has a wife, they will rent a room and ask Nen, and the dog, to live with them.

“I can’t abandon him,” Linh said of the prospect.

When asked to be more decently dressed for a newspaper photo, the younger man said his formal clothes were being dried and wanted to pose in a sleeveless shirt with his family.