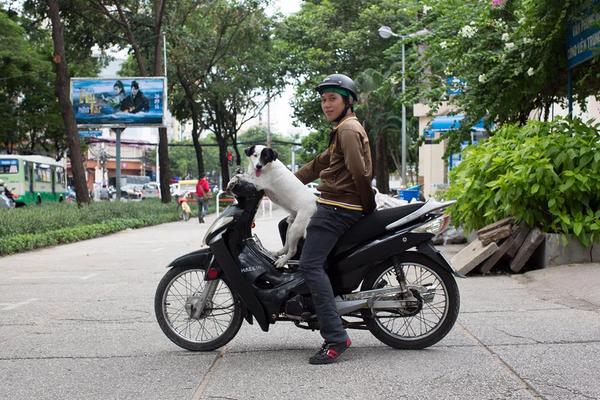 The man behind the hugely popular “Humans of New York” (HONY) photo blog has taken portraits of Vietnamese people in everyday situations during his 50-day world tour under the auspices of the United Nations.

He also added meaningful quotes from the people whom he took photos of in captions.

Over 6,000 portraits have been created so far.

HONY has developed a large following through social media, and has over 10 million followers on Facebook as of this month.

Stanton arrived in Vietnam on September 20 as one of 10 destinations during his 50-day world tour, including stops in Iraq, Jordan, Congo, Ukraine, Haiti, India, and Mexico.

He wasted no time, roaming the streets of Hanoi and Ho Chi Minh City, taking photos of total strangers he met on the street and interviewing them briefly.

The young man posted the photos on his blog, which immediately gained widespread attention.

One of the most popular photos is a portrait of a happy middle-aged couple standing arm-in-arm.

The husband shared the trials and tribulations they encountered while he was a student in the U.S.

The intimacy and sensitivity of these portraits have melted the hearts of many people, both in and outside Vietnam.

"We need to have stories behind photos like these to balance out the insanity, cruelty and pain which are rampant in this world," said one Facebook user.

"I will be home tomorrow for a long visit. My father and I haven't got along well in recent years and I was mad at him. But after contemplating the photos and reading the touching captions, I have decided to let it all go... I will give him a big hug, and tell him that I love him," said another reader.

“Somewhere along the way, HONY began to take on a much different character. I started collecting quotes and short stories from the people I met, and began including these snippets alongside the photographs. Taken together, these portraits and captions became the subject of a vibrant blog,” Stanton writes on his site (www.humansofnewyork.com).

The purpose of Stanton’s 50-day trip is to raise awareness of the Millennium Development Goals (MDGs) – eight objectives, like eradicating extreme poverty and reducing child mortality – that UN member states in 2000 committed to reaching by 2015.

The UN tracks progress toward the goals through more than 60 statistical indicators.

However, Gabo Arora, senior adviser to the Secretary-General’s MDG advocacy group, worries the statistics fail to tell the entire story. Arora turned to Stanton later for advice on how to show human faces.

The two began to conceive the global tour, and the countries were finally cut down from 11 to 10 due to security and supply concerns.

By the next day, when his world tour kicked off, the scenery had dramatically changed.

One of his August 7 photos carried the dateline of Erbil, the capital of Iraq’s Kurdistan region, and featured a young girl sitting on the floor in a hallway.

Stanton, an American photographer and blogger, began his blog in 2010 after his stock business in Chicago failed.

In October 2013, his first book, “Humans of New York,” was released and quickly became a bestseller.

In May 2013, HONY won the 2013 Webby Award's People's Voice prize in the "Best Use of Photography" category.

He also played an important role in a successful campaign to get the New York Public Library to ditch controversial renovation plans.

"When do you feel most alone?"

"On weekend nights in college, sometimes I sit by myself in my dorm room with nothing but a little light on, while my friends all go out."

"What do you love most about your mom?"

"In what way is she hardworking?"

"She cooks food for her business all day. Then she comes home and cooks for us."

"After my son was born, I was unemployed for several months, though I looked everywhere. My mind was a mess. I felt angry toward everything. The lowest point came when my son was diagnosed with malnutrition. I hated myself."

“What are you thinking about?" "I come here to not think."

"Do you remember the happiest moment of your life?"

"Every day when I get home from work."