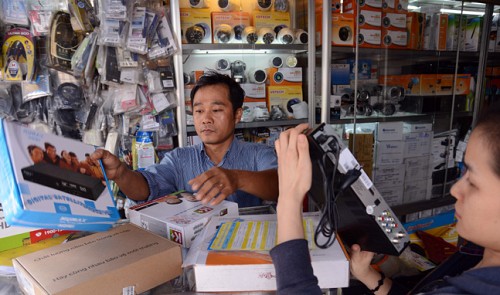 30-40% of local households countrywide will gain access to paid television by 2015, the plan added.

The plan also highlighted the need for radio and television services to be digitalized by 2020, and for a competitive market to be established.

There are roughly 18.2 million households with television sets in Vietnam. Among them, nearly 12.6 million are currently using antennas.

By 2015, 80% of households with TVs nationwide are expected to have access to digital TV, among which digital terrestrial TV will account for roughly 55%.

By the end of 2015, central and local television and radio stations are expected to switch totally from analog TV to digital terrestrial television in major cities.

However, according to experts, digitalizing television, which is designed to enhance television quality and save the country’s digital resources, is a costly, long-term process, as the new technology will cost TV and radio stations billions of dong.

According to national statistics from 2011, TV viewers nationwide would have to spend a staggering VND9,100 billion (US$433.6 mil) to buy new reception devices for digital services.

While television service providers are quite enthusiastic about the project, most locals remain indifferent, as the addition of new programs doesn’t quite make up for the extra expenses.