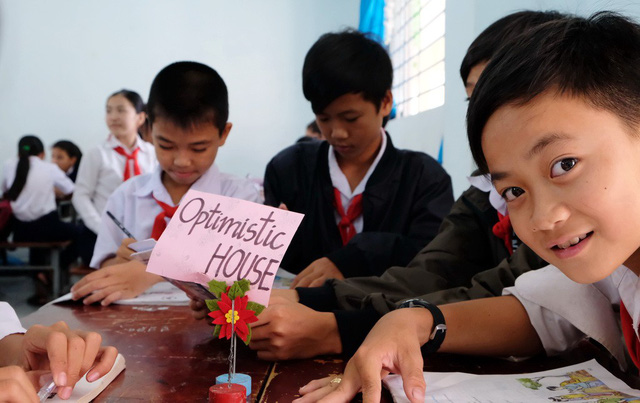 A mere 100km from Ho Chi Minh City, sixteen young professionals from various backgrounds are hoping to impact the lives of underprivileged youth by offering English lessons in rural schools.

Teach For Vietnam (TFV), part of the Teach For All Global Education Network, has been operating in eight elementary and junior high schools in Tay Ninh Province since June 2017.

Tuoi Tre (Youth) newspaper spoke with Huyen Trang, a TFV fellow, about her experience working with a class in Tay Ninh.

Classes with singing and games

As Trang urged students into the classroom, 36 children seemed to magically fell into their seats before she could bat an eye.

At once, the class broke out into a choir of voices singing and excitedly pointing at one of the students, asking “Thuy Vy, what are you doing?”

A screen inside the classroom showed Thuy Vy’s name and a character holding a microphone.

“I'm singing, I'm singing,” Thuy Vy, a student in the class, answered as she put her hands near her mouth, as if she was a pop star singing into a mic.

In turn, all 36 names of the students appeared on the screen, accompanied by English verbs such as learning and watching. As each name appeared, a new smiling student would act it out, giggling their way through the activity. One boy even jumped out of his seat and acted as though he was hugging a guitar.

When Trang taught her students about weather, the children were equally as enthusiastic. As each type of weather – sunny, rainy, stormy – was announced, their hands and feet would make movements mimicking raindrops or windy clouds.

Students who answered questions correctly throughout the lesson were rewarded with high-fives.

When Trang asked the children about the number of districts in Tay Ninh, the whole class began their attempts to form questions about the weather in each one.

As each student made an attempt at correctly forming a question, the young teacher patiently encouraged them to give it another shot. “Pretty close, come on...again…” she prodded until one little girl was able to properly asked “What is the weather in Chau Thanh District?”

A few kilometers away in Duong Minh Chau District, class 6A2 at Cha La Secondary School was divided into seven “houses” by Le Hoang Phong, a 26-years-old TFV fellow.

Inside the classroom groups of six to eight students sat together in “houses” named with adjectives such as Bouncy, Confident, Optimistic, and Energetic.

“I wanted to do the same thing as in the Harry Potter series, where the students are chosen for houses that represent their character,” Phong explained.

Twenty-three-year-old Tran Quang Phuc, another TFV fellow at Cha La, uses games as a primary method to make learning fun for her students.

Phuc does not like the idea of giving homework to his students or making them sit quietly at their desks.  Instead, he focuses on active learning as a means to engage each pupil.

“The children can play a game many times to try to do better.  They can learn from experience to get a higher score the next time.”

Since the school has no computer lab, Phuc brought his old laptop from college to use with the students.

The opportunity to use technology in the classroom kept the students so enthralled that some of them played one of Phuc’s games nearly 20 times, and of course, remember each word presented throughout.

Door to a bigger world

After teaching just two lessons, Phong left the classroom soaked in sweat from moving so rapidly between each of his classes “houses” to work individually with weaker students.

After class, the teachers and certain assigned groups collect waste, clean, and rearrange tables and chairs.

As most of the school's students come from needy families, many of them live in very rural areas of the district, with some traveling as far as ten kilometers each way to get to school .

After nearly a year at Cha La, the 26-year-old is happy to see that he has made a positive impact on his students, particularly with their budding self-confidence and intense motivation to learn.

Phong’s own educational background includes graduating from the Ho Chi Minh City University of Pedagogy and a year in Malaysia preparing a master's dissertation on educational leadership, during which time he did interpretation work for the general consulates of several countries.

Knowing that he wanted to help his own country improve its education system, Phong felt he had found his calling when he first learned about TFV and was accepted as a fellow for the organization’s first project in Vietnam.

Each TVF member has their own unique background.

Huyen Trang, for instance, studied biotechnology at the Ho Chi Minh City University of Sciences, while Thuy Duong earned a Master’s degree in environmental studies in Germany and a PhD in Finland.

Another fellow, Thu Thao, studied international business at the Hanoi Foreign Trade University, while Thanh Phuong graduated with a marketing degree from a U.S. institution.

Despite their unique backgrounds, all the teachers agree that is a means for students to open the door to a bigger world.

“We [TFV] hope that students will not only be able to use English but also learn other values of life,” said Huyen Trang.

Apart from regular lessons, the fellows also hold group talks with their students and foreign peers and tourists, providing an opportunity for the children to practice, learn, and gain confidence in their interactions with foreigners.

Moreover, the TFV teachers are supported by and connected with other educational projects that help develop leadership skills.

They are expected to not only bring the students innovative classes and to inspire other teachers, but also to create projects related to their professions that will impact the local education after they have graduated the fellowship program.

“I realize the huge potential of the games in teaching so I plan to move in that direction,” Phuc said.

Others have identified problems in parental and family education and plan to focus on that area for their future development.

Opening the doors of change

TFV has attracted many young people from a variety of backgrounds.

They are well-equipped with specialized skills to create positive effects and changes on students, teachers, parents, and local communities.

While they are still required to follow the course books provided by the Vietnamese Ministry of Education and Training, the fellows include additional materials with their lessons in order to develop students' English skills, provide them with opportunities for critical thinking, and improve their values and perceptions of social issues.

Huynh Hanh Phuc, founder and executive director of TFV, said that the TFV is currently recruiting 25-30 more fellow members to deploy in other Mekong Delta provinces, where schools are still struggling.

"We hope to open the door for other organizations to join us and contribute to moving education in the direction of progressivity,” Phuc said.