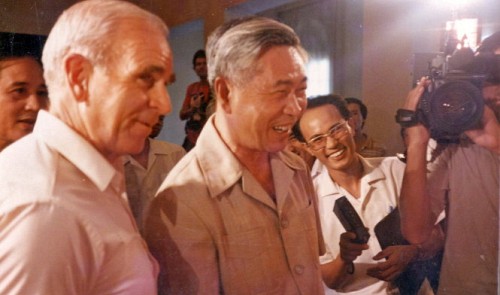 The U.S. administration stepped up its isolation of Vietnam from the world following accusations that the Southeast Asian country had invaded neighboring Cambodia.

In addition, hostile forces in the U.S. even forged a ‘secret document’ by USSR intelligence claiming that Vietnam had transported American prisoners of war to detain them in the Soviet Union.

These moves were meant to prevent the normalization of relations between Hanoi and Washington – a relationship that both sides had pursued and nearly succeeded in achieving before Vietnam’s counterattack against the China-backed Khmer Rouge regime in Cambodia in 1978.

In 1980, Democratic President Jimmy Carter, who displayed an open-minded policy to pursue efforts toward the normalization of diplomatic ties with Vietnam, failed to win re-election for a second term in the White House and was replaced by President Ronald Reagan, a Republican.

Reagan both toughened the relationship with Vietnam and strengthened the arms race against the USSR during his two terms of presidency.

He followed a “three-no” policy: no diplomatic ties, no aid and no business with Vietnam.

Nguyen Manh Cam, former foreign minister and deputy prime minister of Vietnam, recalled, “Reagan announced no normalization with Vietnam until Hanoi was confirmed as having withdrawn its troops from Cambodia and offered full cooperation on the missing-in-action [MIA] issue.”

At the time, Vietnam was economically exhausted and facing an abundance of internal troubles thanks to the failure of its socio-economic policies and the decrease in aid from the bloc of Socialist nations.

“The USSR told Vietnam clearly that they were suffering too and could no longer aid Vietnam as much as before,” recalled former Trade Minister Le Van Triet.

General John Vessey, former chairman of the Joint Chiefs of Staff of the U.S. Armed Forces, flew to Hanoi in 1987 as a special envoy to discuss issues related to POW/MIA.

In 1989, President H.W. Bush replaced Ronald Reagan in the White House. Around that time, Vietnam’s Party General Secretary Nguyen Van Linh announced a withdrawal of all troops from Cambodia.

The following year, the U.S. started softening policies toward Vietnam by loosening the ban on U.S. citizens entering the Southeast Asian country and lifting the telecommunication ban.

Suddenly, a ‘secret document compiled by the USSR intelligence KGB’ appeared, claiming that Vietnam had transported American POWs to continue detaining them in the Soviet Union.

It was also alleged that the secret document was a report by Vietnamese General Tran Van Quang to the Politburo in 1972 when he was in Hanoi, said former Vietnamese Ambassador Le Van Bang.

The rumor was even supported by an American professor, Stephen Morris, and a KGB officer named Kalugin living in exile in Mexico, who said that, “it seems that the secret document is true.”

In 1993, Democratic President Bill Clinton was elected and entered the White House, and made positive steps toward the normalization of relations with Vietnam.

General Vessey of the U.S. flew to Hanoi to meet General Quang regarding the allegations.

To pledge its honesty and full cooperation, Vietnam allowed the U.S. delegation to visit a military base in the Mekong Delta and the base of a solemn site in Hanoi.

Former Ambassador Bang recalled statements by former Prime Minister Vo Van Kiet in a talk with U.S. journalists, “Tens of thousands of families in Vietnam have relatives missing from the war.

“I am one of them. My wife, my son and my daughter were killed during an attack by the U.S. military along the Saigon River.

“I can deeply understand the pain of American families for the loss of relatives in Vietnam.

“I want American people to understand that Vietnamese families have suffered too.

“Anyone who suspects that Vietnam is keeping American POWs is invited to visit Vietnam to understand.”

General Quang later said that he was never in Hanoi in 1972 as mentioned in the ‘secret document of the KGB’.

“I was in the central region before 1973 and only left for Hanoi in the year for medical treatment,” the general added.

He recalled that General Vessey later admitted to him that ‘the secret document of the KGB’ was imprecise, and the U.S. official agreed that he knew General Quang was not in Hanoi in 1972.