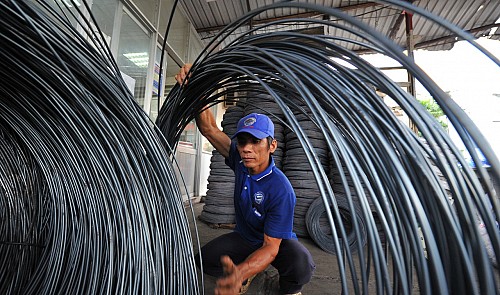 The Vietnamese Ministry of Industry and Trade has launched a safeguard investigation into imports of steel billets and bars, at a time when domestic steelmakers are hurt by imported products, particularly from China.

The probe is carried out to determine whether Vietnam should take a safeguard action, such as levying higher duties on the imports, according to the directive signed by Minister Vu Huy Hoang.

Safeguard action is among three trade remedies as per international law, besides anti-dumping action and countervailing duty measures, according to the Vietnam Competition Authority (VCA) under the ministry.

The investigation has been initiated in the wake of a complaint lodged by a group of four domestic steelmakers, which collectively account for 34.2 percent of the country’s supply of the said products.

While only 468,000 metric tons of steel billets were imported into Vietnam in 2012, the volume is expected to rise to 1.5 million metric tons by the end of this year, the steelmakers said in the petition sent to the VCA.

Similarly, steel bar imports this year are forecast to be more than 1.12 million metric tons, compared to only 389,000 metric tons three years ago.

Such an increase of imported products has eaten into the market share of the domestic steelmakers, forcing them to cut production over poor sales.

In the meantime, the market share of imported steel billets and bars has jumped 250 percent and 117 percent, respectively, in 2012-15.

Nguyen Van Sua, deputy chairman of the Vietnam Steel Association, said domestic steel billet and bar makers have had to operate at only half of their full capacity in the past year.

“Their sales only rose 10 to 15 percent, whereas the growth of imported products was as strong as 150 percent,” he added.

The four firms demanded that a 45 percent and 33 percent import duty be levied on imports of steel billets and bars, respectively.

The tariffs should be immediately imposed for 200 days, before the trade ministry releases the final conclusion of its safeguard investigation, according to the petition.

“The proposed import duties are justified, given the difficulty the domestic steel industry is facing,” said Le Sy Giang, a trade remedy expert.

“While the decision to call for the safeguard investigation came quite late, it still indicates that Vietnamese businesses have known how to make use of trade regulations as per international law.”

Most of the steel products that will be inspected by the Vietnamese trade ministry were imported from China, according to sources close to Tuoi Tre (Youth) newspaper.

As of the end of November, Vietnam had spent US$6.79 billion importing 13.85 million metric tons of steel of all kinds, with Chinese products making up 61 percent and 55 percent of the volume and value, respectively, according to customs data.

Vietnam currently slaps a zero tariff on imports of steel alloyed with chromium, whereas the non-alloy products are subject to a nine percent tax.

Many businesses therefore import alloy steel billets with a very small content of chromium to enjoy the tariff exemption.

With the small content of chromium not affecting the quality of the steel billets, businesses can turn them into steel products used for construction, instead of importing the highly-taxed non-alloy steel billets.

“This is in fact a trick to evade taxes, which causes huge damage to the state revenue,” a steel expert said.

No action was taken following a probe into imports of float glass, while the sodium glutamate investigation is still ongoing.

Cooking oil is the only product to be taxed following the safeguard investigation, with an import duty of five percent, applicable to the period from May 7, 2013 to May 6, 2014.