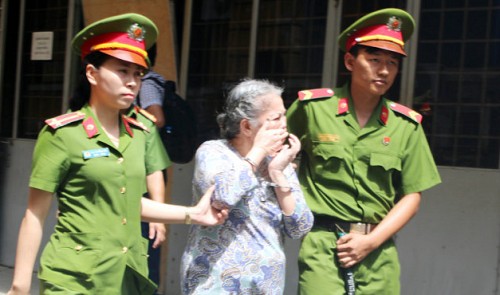 A court in Ho Chi Minh City on Wednesday sentenced an elderly Australian national to death for trafficking 1.6kg of cocaine out of Vietnam in late 2014.

Nguyen Thi Huong, 73, received the sentence at her trial on charges of “illegally transporting drugs.”

Huong was arrested at Tan Son Nhat International Airport in Ho Chi Minh City on December 10, 2014, when she was about to board a flight to Australia, with 36 bars of ‘soap’ in her checked baggage.

Security forces took the suspected products for testing, which later revealed that the ‘soap bars’ were in fact heroin, weighing a total of 1.63 kg.

The Australian woman told the court that she had been gifted those ‘soap bars’ by a woman named Helen, when they were on a trip to the coastal city of Vung Tau. Huong said she only wanted to take those gifts back to Australia with her, not knowing that they were drugs.

However, she failed to prove that there was really anyone called Helen.

Defending Huong at the court, lawyer Nguyen Nguyen Thy and a representative from the municipal foreign affairs department demanded a more lenient sentence for her, citing her bad health and unstable memory at the age of 73.

A representative from the Australian Consulate General in Ho Chi Minh City suggested that Huong not get a death sentence, as capital punishment has been abolished in all jurisdictions in Australia.

However, the court considered the act of trafficking 1.6kg of drugs is a severe offense that is extremely dangerous to the community, so it upheld the death sentence.