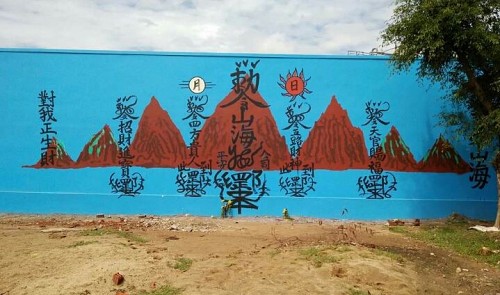 A Chinese-owned factory in the central province of Quang Nam has been probed by local authorities for painting feng shui charms on its brick wall.

Phan Van Trinh, head of the Office of Culture and Information in Dai Loc District, Quang Nam, confirmed to Tuoi Tre (Youth) newspaper on Friday afternoon that the Dai Tan ethanol plant has been investigated for the mysterious drawing.

A chain of mountains was painted on the two-meter high wall, along with several columns of Chinese characters, stirring curiosity and concern from local residents.

The local People’s Committee has been requested to figure out the meaning of the letters, Trinh said.

“The company previously asked for permission to build a small shrine inside its premises but was turned down by local authorities,” the official added.

Initial investigation indicated that owners of the facility had violated the law on advertising as the writing showed spiritual and superstitious content, which is against Vietnamese tradition and custom, Trinh elaborated.

The drawing could be just a good luck charm for the firm’s operation, the official continued, before adding that the company’s managers still need to be questioned while the painting would be removed.

“If they fail to comply with the decision, competent agencies will act in accordance with the law,” he asserted.

The case has also been reported to the provincial Department of Culture, Sports and Tourism, according to the official.

The Dai Tan ethanol factory originally belonged to the Dong Xanh JSC but was later sold to the Tung Lam Biofuels JSC, a Chinese-owned firm, due to losses.