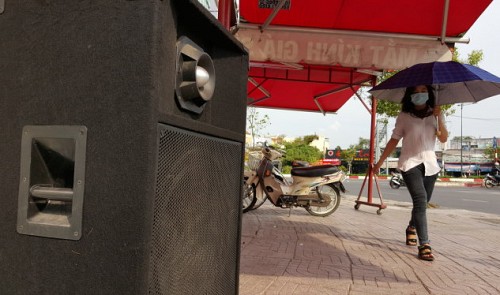 What do foreigners think about noise pollution in Vietnam?

Noise pollution, especially from music at shops and restaurants, has become an alarming problem in Vietnam’s major cities in recent years.

Many expats in Ho Chi Minh City and Hanoi have experienced uncomfortable moments due to the noise.

Tuoi Tre News conducted some short interviews to listen to their stories.

I have been in Vietnam for five years. My colleague told me that his neighbor played music until 4:00am in the morning once. He did not call the police, but the landlord, who came and spoke to the guy but apparently nothing changed. He lives in District 4.

I think maybe the law is clear in Australia as we know that from Sunday to Thursday we must finish before 10:00pm, while on Friday and Saturday the law is midnight. Otherwise, the police can be called and are able to stop the music. For a business, the case would be more serious, as the authorities can shut the business down if they don’t follow the regulation.

Sometimes in Vietnam restaurants play music very loudly and it’s uncomfortable for foreigners. I’ve been to a restaurant where the speakers are at the front door and direct the music out. The people in the shop might not hear the music but it is really terrible for the people outside.

Maybe it’s the difference between Western and Asian culture, because I have seen some similar things like this in South Korea, and Taiwan. People use speakers to advertize their products, but in Australia, we never go to a shop that plays music too loud.

I have been in Vietnam for six years. I live in the center of District 1 near New World hotel. It’s funny because in the UK you would expect bars to be quite loud, especially bars which play live music or clubs, but in Vietnam it is usually shops that are very loud.

It’s strange. I can understand why fashion shops play music, however, I don’t know why people have to play loud electronic music to get customers to buy food, baby clothes, furniture. Why do they need to advertise with such loud music?

Moreover, the shops are often located on busy roads, like Cach Mang Thang Tam, with lots of vehicles. People are distracted and there are also problems for the people who live nearby.

The music often plays constantly and it is the same song at maximum volume. It sounds like the speaker will break because it’s so loud.

It’s really disruptive when people want to go to sleep at 10:00 pm and get up early in the morning to go to work, but the music at some shops might last until midnight or even go all night.

I have been in Vietnam for nearly 16 years. I came to Hanoi from the UK in 2001 and lived there only six months before moving to HCMC. I found myself quite uncomfortable with the volume from shops in Vietnam. When I was in Hanoi, I lived right behind Hoa Lu stadium, and they have a lot of promotional events and concerts in the summer. It was very noisy all day.

In the UK, we have rules that prescribe how loud the music can be. We can ask someone to check the volume. They have a machine to come and check. The procedure is very simple. The authorities come immediately if someone complains. Unlike in Vietnam, we do not have to fill in any documents or prove anything. We just need to make a call and the authorities will react straight away.

I have been in Vietnam for five years. I live in Phu My Hung, which is a quiet area. However, beer clubs near my house play their music too loud. It’s really noisy.

In the UK, we can report the case to the police and they will immediately send somebody out to measure the sound. If the violator continually repeats the action, the authorities will eventually send him to jail. They also ban disruptive activities. We have to be below a certain volume. Also, nobody will go to a shop that plays loud music or has speakers in our country.

I cannot shop at Vivo City in District 7 because it is too noisy for me.

I have been living in Vietnam for just over two years, however prior to that time I’ve visited Vietnam at least five times each year since 2005.

Vietnam seems to be the noisiest country on earth, or at least of the many countries I have visited. I recently moved from an apartment that was very close to a karaoke bar. It was no use trying to sleep before midnight as the music was played at a deafening volume. Once asleep I would be aroused around 4am by activity in the street like motorbike horns, people talking and sellers yelling out their products, all building to a noise level where sleep would be impossible.

Unlike Vietnam, in Australia you don’t generally find homes in business areas. It is illegal to run businesses next to homes unless they do not disturb the environment or cause noise pollution.

The Vietnamese government needs to enact laws to protect its people as they need quality sleep and rest time. From personal experience, somedays I have been useless after I have been kept awake at night by the Vietnamese monster that is noise pollution.