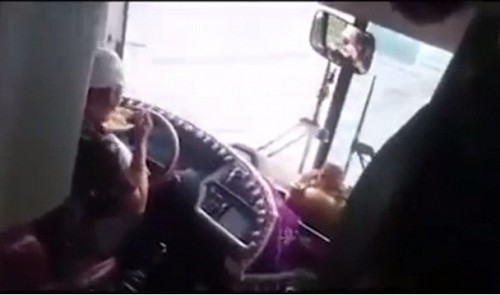 A long-haul bus driver has been suspended by his company after a video surfaced of him eating instant noodles while steering the vehicle in south-central Vietnam last week, local media have reported.

Dan Viet (Vietnamese People) newspaper said on Sunday that Tai Thang Company Ltd., based in the Central Highlands province of Lam Dong, had confirmed that the driver in the clip was its employee.

The driver has been identified as Ho Thanh Dan, driving from Da Lat, a popular tourist resort town in Lam Dong, to Hanoi.

On Sunday, Internet users in Vietnam began circulating the video, lasting more than a minute, showing Dan taking the wheel and enjoying a bowl of instant noodles with chopsticks at the same time.

He was seen eating the noodles using both hands while controlling the bus with his forearms.

A passenger filmed it at 7:00 am on Friday last week, while the bus was traveling on the section of National Highway 1A in Ninh Son District, located in the south-central province of Ninh Thuan, Dan Viet reported.

Transport officials in Lam Dong said that Tai Thang had suspended the driver as soon as it was informed of the footage.

Another driver has now been tasked with driving the bus, which is on its way back from Hanoi, the officials added.

The company said it would lodge a report of the incident to local authorities this week.

In June this year, a bus driver employed by Phuong Trang, a popular Ho Chi Minh City-based bus line, was filmed sitting behind the wheel rolling rice papers while driving in the southern province of Tien Giang.

In June 2015, a driver of Hoang Long Co., a long-haul bus operator based in the northern city of Hai Phong, was also caught neglecting the wheel to focus on his socks and shoes while 40 passengers sat behind him.