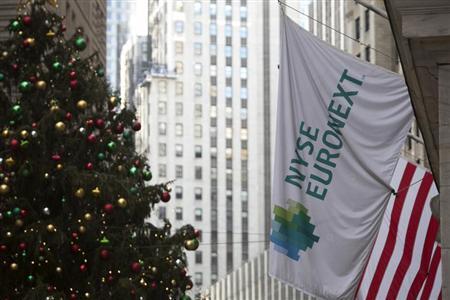 IntercontinentalExchange (ICE) is set to win unconditional EU approval for its $8.2 billion bid for NYSE Euronext, sources said on Monday, in a deal that would strengthen its presence in the lucrative derivatives trading business.

The acquisition would give ICE (ICE.N) control of London-based Liffe, Europe's second-largest derivatives market, and help it compete with U.S. rival CME Group. New EU derivatives rules, to be gradually phased in this year, will dramatically expand the demand for clearing over-the-counter contracts.

The deal would also boost ICE's presence in the interest rate futuresbusiness. The combined ICE-NYSE Euronext would be the third-largest exchange group globally, behind world No. 1 Hong Kong Exchanges and Clearing (0388.HK) and CME Group.

The European Commission, which has been assessing the deal since mid-May, will clear it without requiring conditions from ICE as it did not see any competition concerns, two people familiar with the matter said on Monday.

The Commission, the European Union's competition authority, focused on soft commodities derivatives such as coffee, cocoa and sugar, and found that ICE and NYSE Euronext (NYX.N) dealt in two different types of assets which meant they would not reduce competition after the takeover, said one of the sources.

"The two companies are not close competitors so there are no competition concerns," the source said.

ICE's announcement in March that it would cap its trading fees for Liffe soft commodities such as coffee, cocoa and sugar for five years and put product committees in place, if the merger was approved, also eased possible competition concerns, the source said.

The promise came before the EU antitrust authority started its scrutiny of the deal.

Traders and brokers on NYSE Liffe's soft commodity markets had expressed concerns that the deal may lead to higher trading fees and give ICE a near monopoly in global cocoa, coffee and sugar derivatives trading.

The Commission is scheduled to formally give its decision on the deal by June 24. Antoine Colombani, its spokesman for competition policy, declined to comment.