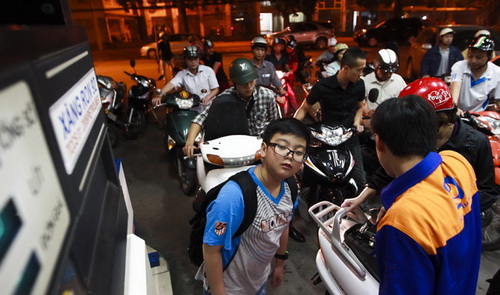 Local fuel wholesalers are trumpeting that they are bearing a loss of VND500 for every liter of sold A92 gasoline, though the world oil price has just witnessed a steep decline.

Specifically, the closing price of A92 fuel price in Singapore, the main import market for Vietnam’s refined fuel, dropped about 18 percent against that in mid-July to about $114 per barrel by the end of last month.

But the fuel wholesalers said crude oil prices were up 8.8 percent, while gasoline futures rose by 12 percent in total in July. Closing the July 31 session, sweet crude for September delivery on the New York commodity trading floor rose $ 1.95, corresponding to a 1.9 percent increase, to $105.03 per barrel, they said.

But the trading price of A92 at Singapore market showed that only about five days after the local retail price of gasoline rose, on July 17, world oil prices fell sharply.

However, according to local petroleum businesses, because the benchmark gasoline prices are still calculated based on the 30-day average price, they still suffer losses.

But if calculating within the last 10 days, they are making a profit from selling fuel locally.

With the latest moan about losses, a normal activity that often takes place when wholesalers want to raise the price, local retail fuel prices may be hiked again, after an unexpected rise to the highest-ever rate at 8:00 pm on July 17 evening.

That was out of the blue since just some hours before the record rise, a price management official said there was no way that the price would be raised at a time when thousands of locals were watching a historic football match between Vietnam and Arsenal.

As a result, it was a rare scene when there was almost no long vehicle lineup at local gas stations as would normally be expected on such occasions.