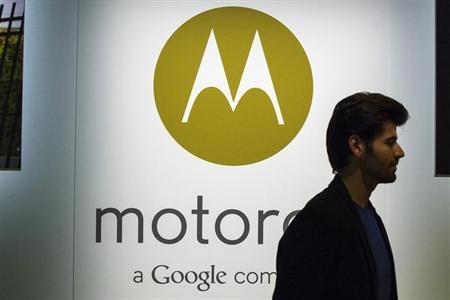 SAN FRANCISCO - Motorola is betting that low-cost smartphones can provide the spark to rekindle its struggling business, even as the company's ownership by Google Inc will force it to sit out of China, the world's largest smartphone market.

The company's new Moto G phone, unveiled on Wednesday morning, will be available for $179 without a wireless service contract, about one third of the price of Apple Inc's new iPhone 5C.

The new Motorola phone, which is being aimed at consumers in developing markets like Brazil and India as well as budget-buyers in Western countries, is the second major new product that Motorola has developed since its acquisition by Internet company Google in 2012.

Motorola, which reported a $248 million operating loss in the third quarter, is trying to break back into the top ranks of a fiercely competitive mobile phone market currently dominated by Apple and Samsung Electronics Co Ltd.

There are about 500 million people looking to purchase a smartphone with the Moto G's price tag, said Motorola Chief Executive Dennis Woodside in an interview with Reuters last week. "You don't have to get a lot to have some substantial change in trajectory for the top line and for the unit sales," he said, describing Motorola's business opportunity with the Moto G.

The Moto G will be available in Brazil and parts of Europe on Wednesday, with availability across Latin America, Europe and Canada in the coming weeks, and in the United States, India, Southeast Asia and the Middle East in the first quarter.

But the Moto G will not be available in China, the world's largest smartphone market by volume. The smartphone market in China is currently larger than the United States and Western Europe combined, according to research firm Strategy Analytics.

Woodside said that because the phone featured Google search, Gmail email and other Google Web services, the device could not be sold in China given the "current regulatory situation." Google relocated its search engine from mainland China to Hong Kong in 2010, in order to offer uncensored search results.

Phone makers that offer handsets in China which are based on Google's Android mobile operating system typically replace Google apps like search and email with alternative services, he said.

"Given where Motorola is today we're going to cover plenty of ground with this device, and maybe down the road things will change in China," Woodside said.

The Moto G lacks some of the high-end components found in the $549 unlocked version of the iPhone 5C or the roughly $600 Samsung Galaxy S4. But the Moto G's 4.5 inch touchscreen and 1.2 Gigahertz Qualcomm Snapdragon processor are leagues above what's available in other low-cost smartphones, which are often based on older technology, said Woodside.

Motorola is not the only company looking for success by making an affordable smartphone. Mozilla, the maker of the popular Firefox Web browser, has partnered with handset makers to offer Firefox phones in places like Mexico, Greece and Brazil. Nokia's Lumia 521 phone, which is based on Microsoft Windows software, is available for $99 without a wireless service contract.

Motorola's new phone comes a few months after it released its Moto X smartphone, which sought to stand out from the pack by offering consumers the ability to personalize the device with different colors and with its always-on voice recognition technology.

According to Strategy Analytics, there were 500,000 Moto X shipments worldwide in the third quarter -- though the Moto X's August release date meant that it was not available for the entire quarter. Still, the shipments are well short of the 33.8 million iPhones that Apple said it shipped during the third quarter.