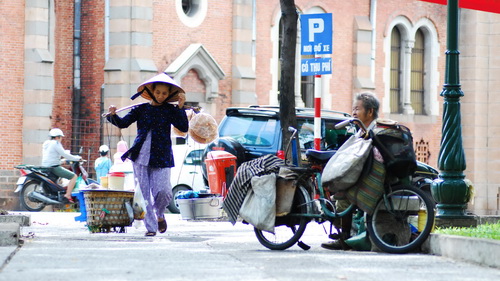 The Vietnamese government’s issuer and senior unsecured bond ratings were upgraded one notch to B1 from B2, the bond credit rating business said, adding that the country’s outlook is stable.

The rating firm, meanwhile, has maintained the short-term foreign currency bond and deposit ceilings at "Not Prime.''

These ceilings act as a cap on the ratings that can be assigned to the foreign currency obligations of other entities domiciled in the country.

Moody’s also elaborated on the three key drivers for the rating upgrade in a report on its website.

First, Vietnam is in the midst of its third consecutive year of broad macroeconomic stability. Although economic growth has fallen since 2012, as compared to the preceding decade, the economy has been characterized by price stability.

Real GDP growth averaged 5.3 percent year-on-year between 2012 and the first half of 2014, lower than the average of 6.8 percent between 2002 and 2011. At the same time, inflation stayed under 7.5 percent year-on-year for 26 consecutive months through July 2014, the longest time it has remained under this level since at least 2000, the rating firm reported.

As for the second driver, according to Moody’s, the strengthening of the balance of payments and external payments position has been underpinned by a diversification in the structure of Vietnam's exports toward more capital-intensive manufactured goods, such as mobile phones and electronics, and away from commodities and traditional labor-intensive products, such as textiles and shoes.

Combined with relatively weak imports, this situation has resulted in the current account shifting from a deficit to a healthy surplus. In turn, this development has contributed to the accumulation of foreign exchange reserves to an all-time high of US$35.9 billion, as of April 2014, as well as the stability of the exchange rate.

Finally, the operating environment for the banking system has stabilized, and risks to the government's balance sheet will likely remain limited.

Nevertheless, the overhang from a decade-long credit boom – as manifested in the still large stock of non-performing loans – continues to constrain the banking sector, undermining its ability and willingness to intermediate credit, Moody’s warned.

As for the stable outlook, Moody’s said the B1 rating reflects the expectation of continued macroeconomic stability, which would in turn further support the restructuring of the banking system and augment the country's external payments position.