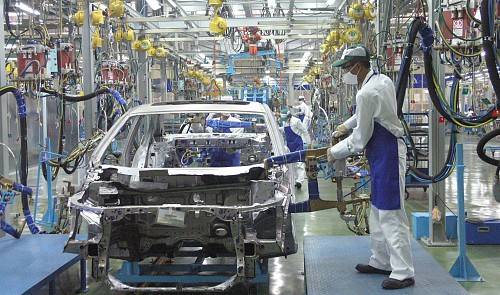 This is the 18th consecutive month that automobile sales in Vietnam have grown over the same period in the previous year.

Sales in the first nine months of 2014 jumped 34 percent from the same period last year to 90,108 units, VAMA said in its monthly report.

The production of locally-assembled cars reached 11,323 units, up 16 percent from the previous month, while the number of imported vehicles, or completely built units (CBU), stood at 4,917 units, up 73 percent.

By the end of September, sales of locally assembled vehicles had risen 30 percent compared to the same period last year to 79,754 units, while the sales of imported vehicles rose 30 percent year-on-year to 26,955 units.

With car sales continually increasing in the first nine months of this year, VAMA has raised its sales forecast in 2014 to 145,000 units, up 15,000 units from the previously forecast 130,000 units.

With these latest figures, automobile sales in 2014 will increase 32 percent compared with 2013.

Among VAMA members, Truong Hai Automobile Co. (Thaco), specializing in assembling trucks, buses and sedans, continues to lead in the number of cars sold, with 4,195 vehicles moved, accounting for a market share of over 32 percent.

In the first nine months of the year, Thaco sold 28,701 vehicles, up almost 30 percent over the same period last year, reaching the sales target of over 35,000 vehicles it set earlier this year.