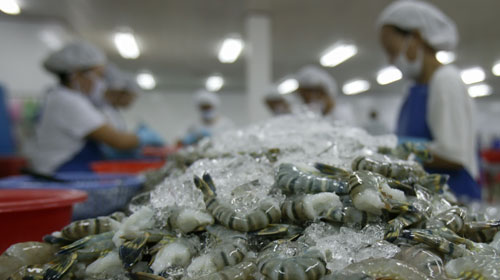 The Vietnam Association of Seafood Exporters and Producers (VASEP) has asked local seafood exporters to keep the antibiotic residues in their exports within limits, and try to find new markets for their products to offset the losses in traditional markets.

The VASEP requirement came after the U.S. Food and Drug Administration (FDA) refused to grant the import licenses for 140 shipments of frozen shrimp found with high rates of antibiotic residues from India, Malaysia, China, and Vietnam in the first three months of this year.

Of these, 96 shipments were imported from Malaysia, 25 from Vietnam, 13 from India, five from China, and one from Indonesia.

According to the VASEP, the FDA said the exported shrimp was found containing nitrofurantoin, an antibiotic used to treat urinary tract infection, and other veterinary drug residues.

Last month, the FDA announced that it refused 107 shipments of shrimp from India, Malaysia, China, and Vietnam in the first two months of 2015, a year-on-year rise of 224 percent in terms of the number of shipments found contaminated with antibiotic residues. It was also the highest rate in the last 10 years.

Tran Van Linh, general director of Thuan Phuoc Seafood JSC, told Phap Luat (Law) newspaper that the same rules, like what the FDA has used, are applied to Vietnamese seafood exports to other foreign markets like the EU and Japan.

In recent years, Japan has checked all of shrimp shipments from Vietnam for some periods after many of such exports were found contaminated with antibiotic residues.

The East Asian country's authorities have also said that if the situation does not improve, Japan will consider adopting more stringent measures, including a temporary suspension of shrimp imports from Vietnam, Linh said.

Therefore, Thuan Phuoc spends US$1 million a year controlling antibiotic residues in exports, by sending its staff to supervise the farming process and examine the materials provided by merchants, he added.

Truong Dinh Hoe, secretary general of VASEP, told Phap Luat that the majority of Vietnamese enterprises follow very strict regulations to control the quality of input materials, but some have faced problems as they failed to keep a check on their input from the selection of materials provided by farmers.

As reported by the Agro-Forestry-Fisheries Quality Assurance Department, Vietnamese trade commissions in the EU, Japan, and the United States continued to receive many warnings about seafood shipments containing antibiotic residues exceeding the permitted level in 2014.

Total shipments with chemicals, antibiotics to the EU market have increased sevenfold, from only seven shipments in 2013 to 51 in 2014.

In the U.S. market, frozen shrimp and catfish shipments given a warning also increased 1.6 times to 58 ones in the first three months of 2015.

According to the Vietnamese Ministry of Agriculture and Rural Development, shrimp exports in 2014 were estimated at $4.1 billion, accounting for 52 percent of the total seafood shipments and an increase of 25 percent compared to 2013.

In particular, the U.S. was the largest export market of Vietnamese shrimp with over $1 billion.

In the U.S. market alone, due to the influence of the anti-dumping taxes levied on Vietnamese shrimp by the U.S. Department of Commerce, the export value of the item in the first quarter of 2015 decreased 44 percent.

Meanwhile, Vietnam’s seafood exports to other key markets, such as Japan and the EU, also fell 11.73 percent.

During this time, although there were many efforts from the authorities and Vietnamese businesses, seafood exports to Russia still did not recover.

While the Korean market is a potential one with only a few technical barriers, Arab countries have a good impression of Vietnamese products though having just imported a few shipments.

Meanwhile, the Chinese and Hong Kong markets have many similarities in culture and cuisine, so it is easier for Vietnamese exporters to ship their products there.

The problem is the method of payment, Nam said.